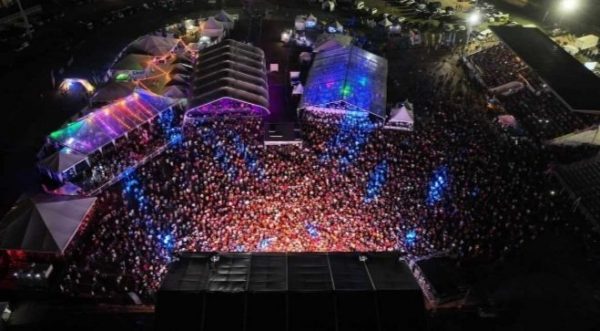 Preliminary data on the 24th hosting of the St. Kitts Music Festival has some 15,000 people attending the three-night event from June 23-25.

“For Thursday night, there would have been an attendance averaging 4,000, Friday 4,500 and Saturday 6,700. I said it is with a caveat meaning that the figures that are associated with the attendance in the four private boxes are not included in this figure. Those private boxes in between the four of them would normally average anywhere between 1,500 to 1,700 extra persons. So those figures are being worked on, and by the time the exit press conference is done, the final figures would be presented,” said Minister Phipps in her remarks at the June 29 Cabinet press conference.

Additional data on the festival is being tabulated, including the total expenditure. Minister Phipps shared that $2.4 million was initially allocated for the marquis summer event. Anyone with outstanding invoices for the St. Kitts Music Festival is encouraged to submit the invoices for payment as soon as possible.

In a recent press release, it was reported that the St. Kitts Music Festival’s expected turnover annually from the festival is in the region of $14 million, with an average of 2000 jobs.

Minister Phipps extended gratitude to the volunteers and vendors who participated in the St. Kitts Music Festival, “I wanted to use this opportunity to extend on behalf of the Federal Cabinet, the gratitude of the Cabinet for the hundreds of volunteers who would have made the Music Festival possible. Every single stage of the Music Festival cannot take place without the work of volunteers, and there are quite a number of them that would have put their shoulders to the wheel and would have made it possible for us to restart the Music Festival in what I consider to be grand high-class fashion. We also thank all of the vendors who would have worked hard to ensure that the festival was a success. There were some eight to ten booths that would have been available for vendors as well as a section for small vendors, and also persons who were selling crafts.”

The festival has been described as a significant contributor to the economy of St. Kitts and Nevis, and the Miniter of Tourism indicated that up until the Tuesday before the start of the festival, June 21, 4,000 general admission tickets had been sold, equalling $540,000 at a cost of $135 per ticket.

A full report is expected in July by the St. Kitts Music Festival Committee in an after-action press conference where details on expenditure, income and overseas visitors will be provided.

The St. Kitts Music Festival was not without controversy, specifically with the payment of licensing fees related to playing artists’ music at the festival.

On June 24, ECCO issued a statement in response to a comment made by Damian Hobson, Chair of the St. Kitts Music Festival Committee, who said that ECCO is paid by the committee every year.

ECCO responded, saying the St. Kitts Music Festival has not yet settled its balance for 2019 and has yet to conclude the licensing agreement for this year’s event.

Legal counsel for the festival requested documentation supporting ECCO’s legal standing in the country through filings with the Ministry of Finance and Inland Revenue Department.

A question was asked during the press conference about the remittances to ECCO for the festival.

Minister Phipps said, “now that the additional information that was requested by legal counsel for the Music Festival has been produced by the requisite attorney, the process of discussion and negotiation would be put in place so that in an expeditious and as possible, once there is proper documentation and logging of the music that has been played for the 2019, and now 2022 Music Festival the appropriate licenses and other fees will be settled.”