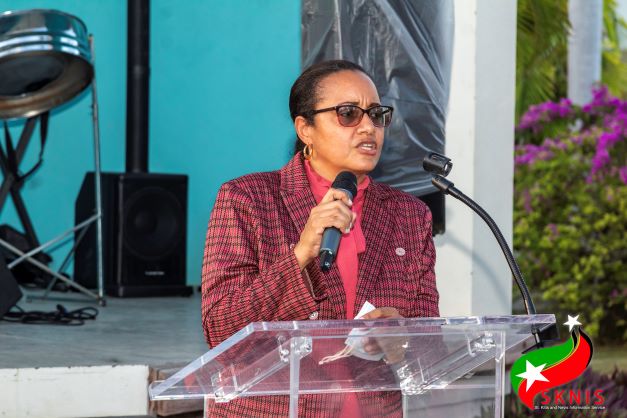 Basseterre, St. Kitts: (SKNIS): The 24th Anniversary of the St. Kitts Music Festival is a major contributor to the economy of St. Kitts and Nevis as the expected turnover annually from the festival is in the region of 14 million with an average of 2000 jobs.

This was announced by Minister of Tourism, the Honourable Wendy Phipps, during her remarks at the St. Kitts Music Festival Welcome Reception held at The Royal St. Kitts Hotel on Wednesday 22nd June, 2022.

“Thus far over the years it has done well for us in terms of its placement and in terms of its economic contribution,” she said. “We also take this opportunity to showcase St. Kitts and Nevis,” said Honourable Phipps. “The turnover that we can expect annually for a festival of this nature is somewhere in the region of perhaps about 14 million and it would have created an average of two thousand jobs and would have been a significant contributor to GDP.”

She continued, “We also wish to use this opportunity to have persons take advantage of everything else that St. Kitts and Nevis has to offer. We are unique islands even though it is one product … and we welcome everyone and encourage everyone from overseas to take advantage of these offerings.”

She also stated that the organizers put in place provisions that ensured that the festival would end at approximately 1:30 am, allowing for other bars in the Federation to have the opportunity to acquire extra sales.

She added that everyone in the economy is looking forward to some spinoff and advised that the Government of St. Kitts and Nevis is very hopeful of this spinoff.

“We say a hearty thank you to the Music Festival Committee who we know would have toiled hard and we are also indebted to the sponsors who in spite of the fact that we are still very much in the throws and aftereffects of COVID-19, would have dug deep and continued to support this festival because the government cannot do it alone,” said Minister Phipps.