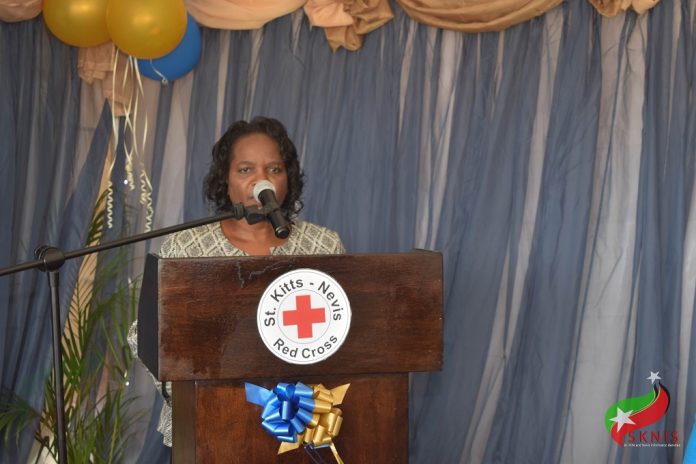 Basseterre, St. Kitts (SKNIS): Kaye Bass, Permanent Secretary in the Ministry of Foreign Affairs and Aviation, expressed thanks and appreciation to several international partners for their generous donation of an ambulance to the Ministry of Health, and a passenger bus to St. Kitts and Nevis Red Cross Society (SKNRCS) that were handed over during a brief yet significant ceremony on Wednesday, February 24, 2021, at the Joseph National France (JNF) General Hospital.

The vehicles, which were donated by the Government of the United States of America through its Agency for International Development (USAID) with assistance from the International Federation of Red Cross and Red Crescent Society (IFRC), will aid St. Kitts and Nevis in bolstering its health system

“The ministry joins with the Ministry of Health in expressing appreciation to the American Government for its usual response to humanitarian appeals and for specifically tailoring assistance based on our capacity, thus providing the exact items needed,” said Permanent Secretary Bass. “We thank the United States Government… for continuing to engage with bilateral and multilateral donor partners to coordinate response efforts, identify funding needs, address operational challenges, and to select the most appropriate mechanisms to fill identified response gaps. Indeed, the ambulance will fill a well-needed gap,” Ms. Bass added.

Ms. Bass noted that the donation is timely and significant.

“The ambulance, a single item, may be perceived small but it is indeed significant in light of the fact that it has been gifted and will more than likely free up funds perhaps originally allocated in the ministry’s budget to be channeled to bolster other aspects of the health system. It will undoubtedly enable the health teams to respond more quickly to medical emergencies and it will facilitate faster medical treatment, thereby enhancing service delivery,” she said.

Speaking briefly on the coronavirus pandemic, Ms. Bass said that one “truism highlighted is that in an increasingly interconnected world a health threat anywhere is a health threat everywhere” adding that countries were prompted to close their borders to protect lives and livelihoods.

She applauded the United States government for its continued support, especially during the pandemic.

“This pandemic is a stark reminder that many of the pressing health issues facing nations are now inherently transnational if not global. Locally, we have been calling for an all of society approach, and globally it requires no less. Indeed, it has been forged a responsibility of countries with the wherewithal to support countries with limited resources to tackle health problems within their own borders,” said the permanent secretary. “The ministry, and by the extension the Government of St. Kitts and Nevis, commends the United States for not only recognizing its responsibility but also fulfilling it, be it through the donation of equipment, building capacity or provision of financial resources to assist countries to combat the spread of the virus,” she said.