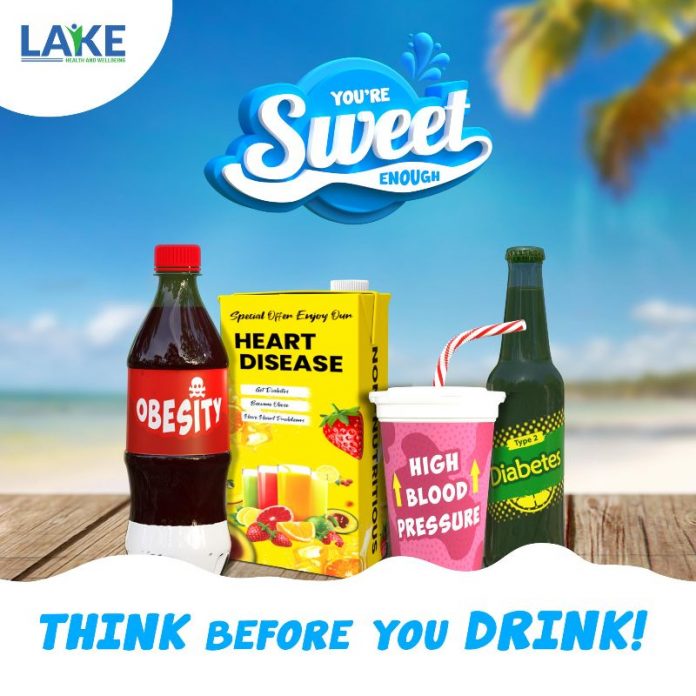 Basseterre, St. Kitts (SKNIS): The Ministry of Health, in collaboration with Lake Health and Wellbeing, has launched a public awareness campaign called “You’re Sweet Enough” in order to raise awareness of the harmful effects of consuming Sugar-Sweetened Beverages (SSBs) and to encourage the public to drink more water.

The campaign was launched on March 22, 2021, at the Solid Waste Management Corporation Conference Room.

According to Isalean Phillip, Advocacy and Research Officer for Lake Health and Welbeing, who spoke at the event, regular consumption of sugary drinks is found to be linked to weight gain and obesity, which are very common risk factors for developing Non-communicable Diseases (NCDs) such as diabetes, hypertension, stroke, and various forms of cancer.

In St. Kitts and Nevis, Non-communicable Diseases are the leading cause of death, she said, noting that Lake Health and Wellbeing is committed to improving the health and wellbeing of all our communities.

“In so doing, we are happy to work along with the Government in collaboration with the Ministry of Health to combat these health challenges,” she said. “So, today, we are extremely excited to launch the “You’re Sweet Enough” Campaign, which is developed to mobilize the public to make healthy choices and drink water instead of sugary drinks.

Ms. Phillip stated that the campaign will be ongoing for nine months and will utilize various platforms to spread awareness and educate the public about the health effects of consuming sugary drinks.

“Everyone can look forward to seeing and hearing campaign messages via social media, music, videos, animations, billboards, and we will also be engaging with the public with research surveys, information sessions, and events with experts, stakeholders, and other collaborators,” she said.

The Research Officer said that with the campaign, Lake Health and Wellbeing is committed to supporting the Ministry of Health in advancing its action plan for the prevention of Non-Communicable Diseases in St. Kitts and Nevis.

Dr. Marissa Carty, NCD Coordinator, who also spoke at the event, stated that the Ministry of Health recognizes that urgent action is needed in protecting the health of the nation and effectively combating the negative effects of excess sugar consumption.

“As such, the Ministry of Health is grateful for the opportunity to partner with Lake Health and Wellbeing in this public awareness campaign,” she said. “This campaign will afford the opportunity to share evidence-based information about SSBs to specific audiences regarding the harmful health effects of SSB consumption and to suggest healthy beverage choices such as water [instead of] the deceptive and manipulative marketing of SSBs to vulnerable communities and demographics such as children, youth and young adults.”

Dr. Carty stated that there is also a need for the implementation of adequate food labelling for sugar sweetened beverages. She added that the accessibility of SSBs can be reduced by implementing measures such as a Sweetened Beverage Tax in an effort to build support from the public and private sector stakeholders.

“Therefore, the ultimate goal of this campaign includes increased knowledge about health problems associated with intake of added sugars in Sugar-Sweetened Beverages and a behavioural change to reduce the consumption of SSBs,” she said.

Dr. Carty said that the Ministry of Health stands ready to support the campaign by encouraging the general public to “drink some water, share some love, and tell somebody “You’re Sweet Enough.”