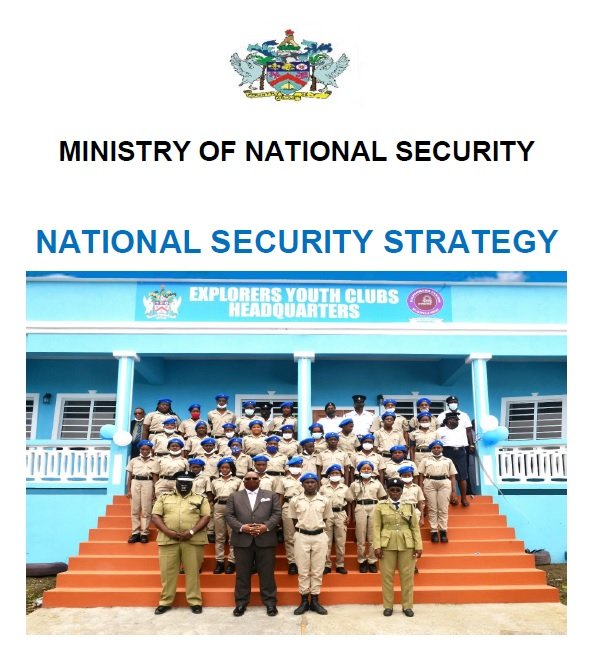 Basseterre, St. Kitts (SKNIS): The Ministry of National Security has publicly shared its National Security Strategy (NSS) which provides a comprehensive plan for an “all-government approach” to further ensure a safe and secure environment for citizens, residents and visitors.

The objective of the NSS is to clearly determine the threats that impact, or could impact, the Federation of St. Kitts and Nevis, inform the citizenry, as well as provide for and take those actions that are necessary to ensure the safety, security and stability of the nation and its interests. The document represents the results of a detailed and extensive study that was undertaken by the Government of St. Kitts and Nevis, together with consultations with all the relevant stakeholders to include a very wide cross-section of the public. The Government now presents the strategy for dealing with the Federation’s threat realities and outlines the Threat Assessment, Approach, Tier Rating System, Responsibilities and their Allocations, Tangential or Cross-cutting Issues and Closing Statements. Through the strategy, all government Agencies, Ministries and Departments are expected to review their structure and operations to ensure that the security of the nation receives priority attention as required.

In 2015, at the start of the first term of Office of the Team Unity Government, the administration was determined to address the escalating crime trends that had been plaguing the country. In response, several steps were taken to tackle the situation. According to Permanent Secretary in the Ministry of National Security, Osmond Petty, M.B.E., this led to the development, government approval and subsequent implementation of a Strategic Six (6) Point Plan which was initiated by the Royal St. Christopher and Nevis Police Force (RSCNPF).

“The positives of the Six (6) Point Plan Strategy had been noted, but it was not representative of a comprehensive Policy to address the security challenges confronting the nation. There was, therefore, a need to provide a more holistic approach to confronting these challenges, as is the accepted practice regionally and internationally,” Mr. Petty elaborated.

In their deliberations, the NSSFC engaged the principals in the Civil Service, the heads of the security forces and agencies impacting national security plus other organizations, bodies or individuals that were deemed relevant to the matter at hand. These interactions took the form of meetings, focus-group discussions, as well as Town Hall meetings. The NSSFC was mindful of the fact that the security challenges to the nation exist in a dynamic environment and there are processes constantly in motion, based upon current Government Policies, to address pressing issues. In this regard, there would have been programmes already implemented, or being implemented, that were geared to improve the current status of our National Security Architecture.

Once the information was gathered by the committee, Major General (ret.) Saunders, in collaboration with Mr. Petty, took the recommendations from the NSSFC and, using other pertinent Ministry documents and data available to them, fashioned the National Security Strategy, which was presented to Cabinet. The document received approval from Cabinet late last year. The strategy will strengthen the Government’s efforts to continue to reduce criminal activity in the Federation and will complement the results of initiatives already in place which have driven crime on a downward trend over the last five years.

According to the vision statement in the NSS, St. Kitts and Nevis is a nation that puts God and Country Above Self, where all exist in a peaceful, safe, secure and stable environment; a place where citizens, residents and visitors can live, study, work, and do business; a Federation that values its people, system of governance and consistently seeks improvements for all, by providing opportunities that cater for individual and collective well-being through economic growth, prosperity, good health and the respect for law and order; a small island state in which all sectors of the nation – government agencies and private sector, at individual and organizational levels – work together to ensure all threats to its security are minimized or totally removed.