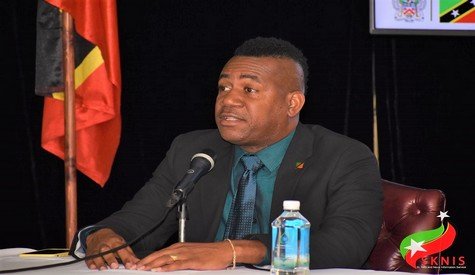 Basseterre, St. Kitts (SKNIS): In efforts to rectify the current Cayon water situation, the Ministry of Public Infrastructure is currently in the process of testing the Shadwell number 2 well.

This was revealed by the Minister with responsibility for Public Infrastructure and Deputy Prime Minister Hon. Shawn Richards during the Prime Minister’s Press Conference on August 11.

“The Ministry of Public Infrastructure is aware of the concerns of the residents of Cayon relative to the supply of water,” he said.

“One of the things that we are doing at this time is to look at a well in Shadwell number 2,” said Minister Richards. “Shadwell number two we are being advised, if it is connected to the cistern in Bayford’s, it has the ability to feed water into Cayon, however we have had concerns with shadwell 2.”

The minister said that “Shadwell 2 when it was developed had a number of different tests done on the quality of water.” He highlighted as well that “The initial test showed that the quality of the water is not such that it should be put into production for persons to consume, however, we are in the process of testing.”

“Recently a test was done by the bureau of standards here in St. Kitts; those results looked very good and the director there actually said that the quality looks like that of bottled water that we would use to drink,” he said

“However, out of an abundance of caution the decision has been taken to test the water at other labs outside of the Federation of St. Kitts and Nevis,” the minister added.

“During the course of last week for example we sent a sample to a lab in Miami and we have been told that the turnaround time is approximately ten business days, therefore we are awaiting the results of that particular lab in Miami,” he said.

Minister Richards said that he reached out to the Caribbean Public Health Agency (CARPHA) which also has a lab in Saint Lucia to test the water as well.

“Surprisingly we were able to get the RSS to assist us in transporting a sample of the very same water from Shadwell 2 to Saint Lucia just yesterday (August 10),” he said.

“The RSS made special provisions to come into St. Kitts and take the water back to Saint Lucia and I am being advised that the turnaround time coming from CARPHA is about five business days hence we are awaiting the test from those two labs,” said the minister.

“Once we are satisfied with the results then I think a decision can be taken to put Shadwell 2 into production thereby bringing some temporary relief to the people of Cayon,” he said.

“If the result are not looking good then relative to Shadwell two then we have to put a reverse osmosis system in place in order to purify the water coming from that particular well and there is a next alternative which has also been given to the ministry in terms of ensuring that the water is safe for consumption,” said the Minister of Public Infrastructure.

Carnival Cruise Line Threatens to Pull Ships Out of U.S. as CDC Sticks to Sail Ban

Guilty Verdicts In The Killing Of George Floyd - https://www.winnmediaskn.com/?p=11468

Amid Financial Challenges, CWI Restores Full Salaries Across the Board - https://www.winnmediaskn.com/?p=11463

St. Kitts and Nevis Clean Seas is reporting on its

The Ministry of Tourism in the Nevis Island Admini

St. Kitts and Nevis will highlight the contributio