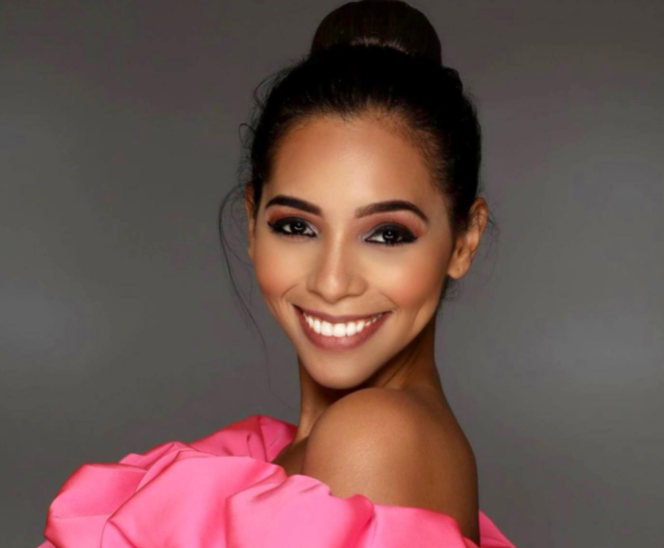 (Trinidad Guardian) Miss World T&T contestant Jeanine Brandt has apologised for her comments on poverty in the country after a massive outcry from citizens on social media.

On Monday, Brandt’s speech from the Miss World competition in Puerto Rico summarising her “Beauty with a Purpose” project went viral, with many claiming she had grossly exaggerated T&T’s situation by saying there were thousands of little girls who sleep on the floor in their homes.

In a release yesterday, Brandt said she was asked to present her project in under two minutes during the competition and meant no harm through her contribution.

“As the Miss World representative for Trinidad and Tobago, I appreciate the significance of my role. I can and have attested to the all the beauty our nation has to offer, however, in this instant I was asked to present on a societal issue I was passionate and purposed about,” Brandt said.

She said for the past two years she has worked through her non-governmental organisation, The Brandt Beauty Foundation, to assist those in underprivileged communities.

“My intention was never to portray our twin-island nation in a negative light or to bring ill repute to the Miss World Trinidad and Tobago franchise,” she said.

Yesterday, Guardian Media visited Bayshore, Marabella, one of the communities Brandt visited during her project in the run-up to the Miss World competition.

Those in the community remembered Brandt’s visit.

Donna Scott-Cobham, a foreman with CEPEP, said she was pleased to see a Miss World candidate in Marabella back then.

She said the community appreciated Brandt’s generosity but she denied there were any families in the area who were living under the conditions Brandt described during her presentation.

“No, not in this area, anytime someone really going through it here, we try to come together, contact the MP (Faris Al-Rawi) and help them out, it probably have that going on in other places but not here,” Scott-Cobham said.

Another resident, Keisha Robain, said she did not know the extent of Brandt’s statements because she did not want to entertain “foolishness.”

She said that level of poverty does not exist in Marabella.

Asked how she would describe the hardships facing residents, Robain said, “They mightn’t have something to eat, they just poor. They mightn’t have money on them…they not paying rent because they are squatters so that is the level of poverty – people squatting cause they don’t have work to pay $2,500 a month for rent.”

Anasa Warner meanwhile said while she thinks there may be some instances of extreme poverty in the community, she believes those cases are in the minority.

“I don’t think it’s as much as she (said), it probably have here and there that we know about but I think she over exaggerated with the thousands, probably if she had said a few hundreds here and there, but not thousands,” Warner said.

Warner said she believed Brandt may have been misinformed about what life in the “ghetto” was like.

She offered some advice to the beauty queen and others who may wonder what she and other residents face.

“Go do a little more research, meet the people, hear their cries, don’t assume from what you hear – come and experience it, that’s my advice to her.”

However, founder of the non-governmental organisation Is There Not A Cause (ITNAC), Avonelle Hector-Joseph, says those who were angry at Brandt for her statement were angry at the wrong thing.

In an interview last evening, Hector-Joseph said there are many families who live below the poverty line in T&T.

“Any citizen who is angry at Ms Brandt is either ignorant of what is taking place in our country, naive, callous or in denial,” Hector-Joseph said.

“A lot of us don’t want to face the reality because if we had to, we would have to live differently and we would be called to account, so we don’t want that – our angst is misdirected.”

She said she does not know Brandt, holds no brief for her and was not trying to defend her but added, “I am saying we have a serious poverty situation in this country, for a country that has seen so many oil booms, it is unacceptable.”

Hector said although T&T has free health care and education, many citizens still cannot access the services they need.

“When somebody has to stay so long to get an ultrasound, when a basic ultrasound machine you can get for the equivalent of US$5,000, and you have to spin in circles and know somebody to get your ultrasound, that is critical for your diagnostic, when we have our citizens under these unsanitary tents getting wet, when the (Education) Minister by her own speech says 2,000 students fell off the grid..those things do not speak to a serious problem in our society?” Hector-Joseph asked.

She said in order to fix the issues, the country must accept and recognise the problems.

“If we continue to ignore them, the people who are suffering will continue to suffer more.”

She said those whose critique was about the way in which Brandt phrased her statements were giving life to a non-issue.

“If that is what people are getting their knickers in a twist about, therein lies why we are where we are today.”

She said messages sent to ITNAC alone could validate Brandt’s statements “a thousand times over.”

She said in 2021, ITNAC visited those in need at their homes because of restrictions on movement caused by the pandemic.

“We had the opportunity to go inside people’s houses and oh my God, I don’t even want to talk to about it…you see these keyboard warriors on Facebook who are offended, are offended over the wrong thing, what they need to be offended by, why after billions and billions of dollars, our citizens are living like dogs,” she said.

She said those who say Brandt’s statements make T&T “look bad” on an international stage seem to only be concerned about the country’s image.

“That’s like when the neighbours come over long time and you cover up everything inside with a sheet to make it look neat but it stink, there is too much suffering in this country, whether she makes us look bad or not, people are still suffering,” Hector-Joseph said.