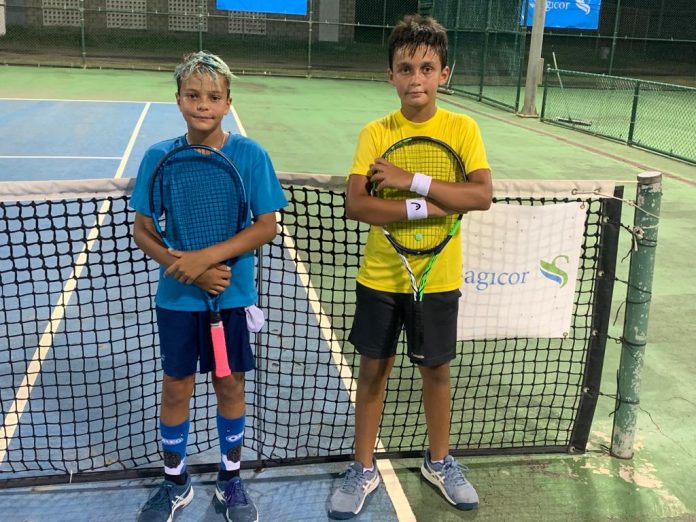 Basseterre, St. Kitts – The players from St. Kitts and Nevis who are participating in the 2022 St. Lucia COTECC Under-14 Junior Tennis Tournament had a mixed opening weekend on the courts in Castries.

A five-member contingent, comprising three players, winged out for St. Lucia on Friday (Aug. 5) and arrived on the following morning and swung into action that afternoon.

On day one, the Federation’s top junior player, Dannielson Lybert, played Tushan Chablani from Surinam and went down in straight sets, 6-7(8) and 2-4.

Dannielson, who played with a great heart and determination, dominated and controlled the pace of play. However, his opponent, Chablani, was determined not to out muscled and eked out the win.

Also in action on day one was Matthew Owen who played against his nemesis, Dimitri Kirton, who recently came off a successful Team competition in Trinidad, along with three of his Barbadian compatriots.

The young Bajan is active on the junior circuit playing 8-10 junior regional tournament events per year, compared to Owen’s new arrival to the regional scene.

At the COTECC Barbados in April, Owen had lost 4-0 and 4-1 to Kirton. However, in the first set at this tournament, an improved Owen came out to fight, but Kirton’s competition experience allowed him to stay focused and confident with his serves as well as ground strokes and kept his unforced error rate down to take the first set 5-3.

For Owen, that was a big improvement when compared to losing his first set to Kirton in the CO Williams COTECC tournament in Barbados.

In the second set, Owen hit a rough patch and was not able to trouble the match scorecard.

On day two of action, Brandon Brisbane played Zane Kirton, another Barbadian national, and showed jitters in his first COTECC tournament and went down 0-4, 0-4

In his second game, he was able to settle down and comfortably defeated Aidan Rosemont from St. Lucia 4-1, 4-0.

In his second game, an improved Lybert defeated Grenadian Kayden McQueen 4-2, 4-0, while Owen was also able to beat Kaeri Mukora 5-3, 4-5 (8), 4-1.
.
Owen showed good Kittitian determination after taking the second set to 3-0, triple match point, and Kaeri did very well to take advantage of Owen’s not closing the door, and took the second set in tie break 5-4 (8-6).

Kaeri was having difficulty maintaining his calm after unforced errors crept in and made some outbursts with punches to the fence. However, his serves and stroke play did not reflect his between-point flare-ups.