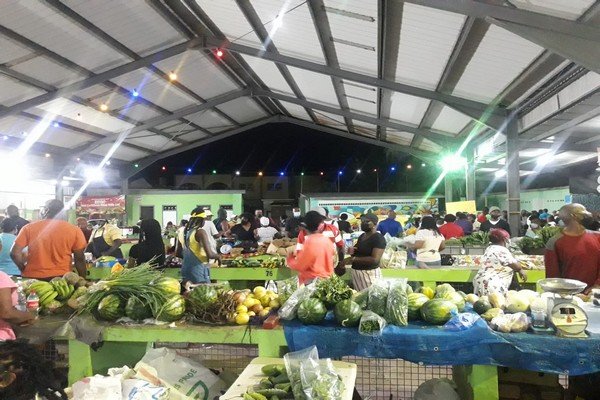 St. Kitts and Nevis (WINN): Farmers, craft vendors and others participated in the Agri Christmas Night Market on December 22, which was also the first anniversary of the quarterly Night Market held at the Basseterre Public Market put on by the Ministry of Agriculture, Fisheries and Marine Resources (MoA).

Permanent Secretary in the Ministry of Agriculture Ron Dublin Collins said that the event was a success because of the participation of the vendors and the patrons and highlighted some of the vendors present during the event to include fishers, farmers, agro-processors, crafts vendors, etc.

“We’re seeing an excellent response by the public, and it has continued to maintain its large numbers right from 5 p.m. We haven’t seen any slacking off; persons come and go but in here has remained very full,” said Collins during an interview at the Night Market.

Marvin Harrigan, a poultry farmer and the owner of Cornville Egg Farm out of Challengers, participated in the Night Market.

Harrigan has been producing eggs on his farm for over ten years and recounted how he got into the business.

“The business started as a hobby with about 12 chickens that I bought from Mr Phipps up the Newtown Bay Road, and I used to just go there and look at the chickens. One day he said to me, why don’t you buy some? You [are] always coming [to] look at them. So I said I didn’t know you could buy them. I [thought] he just had them there as pets… So I started with about 12 chickens. I had them in the backyard at home… 12 chickens can get you a lot of eggs, so the neighbours start buying them and before you know it [my coworkers started buying them, then I moved from 12 chickens [to] 50 chickens, 100 chickens and now well over a 1,000 chickens,” said the poultry farmer during live coverage of the event.

Permanent Secretary Collins emphasised that events such as the Night Market provide spaces and opportunities for farmers and vendors to capitalise on their trade.

“It is all in an effort to support our local farmers and fishers and vendors and promote local. We have been working throughout the year on increased production, and we are seeing some good results from our farmers, and we will continue to work closely with them to ensure that this is done.”

Collins also spoke briefly of some of the investments to develop the sector with the build-out of byproduct processing and the possibility of a fish market in the Basseterre area.

“While we call on them for increased production, there must be a way in which they can pass on their produce. In addition to that, there is also the value chain added to the whole production system that we’ll be working on, shortly we’ll be seeing the sign of completion of the meat processing plant at the abattoir, so we’ll see the patties and the burgers, the choice cuts and so on. So we are adding value to their produce already. The Agro-Processing building is very much near completion, and we’re working with the private agro-processors. In the fisheries area, we are also looking toward value-added systems for that in addition to creating a fish market… We’ll see a lot more developments in agriculture as we go along.”

The Minister of Agriculture, the Hon Alexis Jeffers was also present at the night market and reflected on the lesson the COVID-19 pandemic has taught his ministry; they need to do more.

“I have always said that the COVID-19 [pandemic has] provided us with some unexpected realities and opportunities. Unexpected realities in that we have now realised that we were not doing enough and we can do more. And opportunities to do more and plant more and encourage our people to get more health-conscious in terms of consuming more local products,” said Minister Jeffers.

“So the bottom line is COVID-19 is telling us, listen, we cannot be dependant on outside sources anymore or outside countries, because they would be more interested in feeding themselves in this particular pandemic because of all of the difficulties that we have been seeing in terms of supply chain disruption, in terms of not getting the quantity that we used to get before.”

In February 2022, the Ministry will launch its 10-year Growth Strategy plan for Agriculture to include training for farmers, climate change solutions (water storage) and an increase in the variety of locally grown produce.

The Minister said for the 10-year plan to work, they need the buy-in from the farmers, the private sector, the general public and regional and international partners.