MoENT Launches Month of the Arts 2022 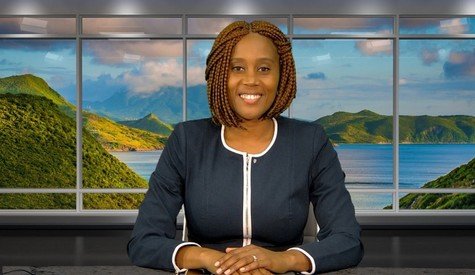 St. Kitts and Nevis (WINN): The Month of the Art, the first initiative for 2022 hosted by the Ministry of Entrepreneurship, Entertainment & Talent Development (MoENT), was announced yesterday (March 11).

The month of activities began on Friday with the opening and will kick off today (March 12) with the launch of an Art Mural Project and continue through to April with various events leading to the commemoration of World Art Day on April 15, followed by the prize-giving and closing ceremony on May 14. 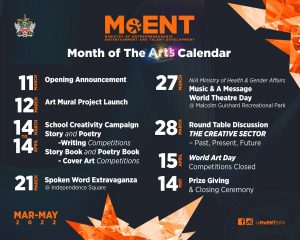 MoENT has identified four areas of the creative industry (the Orange Economy) Film and Photography, Music and Entertainment, Technology and Innovation and Literary and Performing Arts.

The Hon. Akilah Byron-Nisbett, Minister of Entrepreneurship, Entertainment & Talent Development, said that the Month of Arts focuses on visual and literary arts this year.

“Areas that we are all very much aware of, but for which we believe not much emphasis [has] the place. We all see the work of our artists such as Vaughn Anslyn, Sasha the artist and the list can go on and on, and we have noted last year in particular, that will have seen an [uptick] in the number of persons who are have published various books or literary work and two persons that come to me in that area is Mrs. Kimone Archibald-Lake who would have published her first in the series of children’s books and Ms. Jihan William Sula, who also published her first book. And so we believe that with these two areas, we need to be able to give them the due attention that they deserve, and so they are the two areas that we will be highlighting this year.”

The aim of this month of arts, according to Byron-Nisbett, is to bring focus to creative arts, creating a space for artists to gain support and grow along with raising awareness of the possibilities these careers paths have to offer.

Assistant Secretary with the responsibility for Creativity in the Ministry, Kesha Isaac-Adams, shared that the Ministry has already begun work in reaching out to the schools and sensitising young people on what the Ministry is trying to achieve in legitimising the orange economy in St. Kitts and Nevis for locals.

After visiting various primary schools over the past two weeks, Isaac-Adams expressed the need to invest in the already existing talent within the youth pool.

“For that reason, we want to emphasise the talent development of our Ministry because we cannot develop what exists naturally within our people. So, our school campaign is to encourage the children to not shy away from their natural given talents, but to see that there is a pathway to develop them for a better future for them.”

The Ministry continues its outreach with other primary and high schools next week.

Other initiatives the Ministry is undertaking will emphasise building brands, training and networking.

“We believe that if the industry is successful, then we must ensure that our creatives are well equipped with all of the tools necessary to be successful and to thrive. Just this past week, we would have engaged with Mr. Ivan Berry, a native of St. Kitts and Nevis, who has made his name in the music industry in Canada. In that discussion, in particular, something that stood out for me was that he would emphasise the importance of building our creatives to that point where they can compete in the regional and international markets,” said Minister Byron-Nisbett.

With that in mind, the Ministry has highlighted the need for efficiently channelling the raw talent of the Federation.

“We know that our creatives are extremely talented. We know that there’s no question about that fact. But what is needed is for us to take that raw talent and build brands; we need to build lucrative careers. We need to build successful musicians, artists, dancers, actors; you name it. If we are to build a creative industry, be it film and photography, music and entertainment, the arts, innovation, we must ensure that our citizens are ready for the market.”

The Ministry is also working on creating a TV channel where the creative works of locals will be broadcast not just locally but regionally and internationally.

“Another initiative that we spoke of last year and which we are already in the process of being able to get the ball rolling on, and I’m so excited to speak about, is the development of our MoENT TV, a channel geared specifically to the creatives. Allowing you that platform to be able to showcase your talent, your content, whatever it is within the creative space, we’re giving you that platform to do that. And as I would have indicated, then we’re working closely with The Cable so that that channel would not just be for our own local consumption but that it would have regional and international reach as well.”

The Ministry calls for support from all stakeholders, civil society, public and private sectors and academic communities in helping to shape the Federation’s Orange Economy.