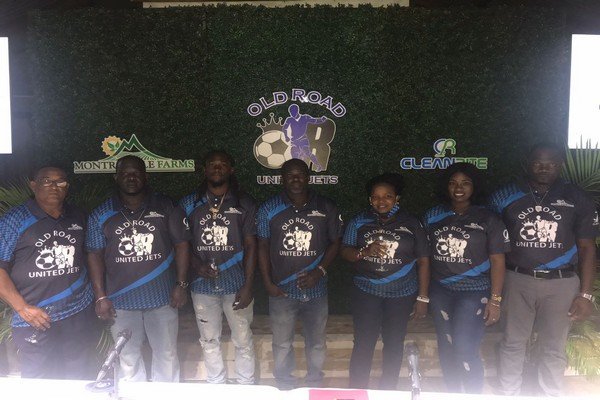 Samal Duggins owner of Montraville Farms is a first-time partner partially raised in the Old Road community – went to Verchilds High School (VHS) – taught at VHS – now back as a corporate partner for the Old Road United Jets FC.

Duggins mentioned that he always wanted to partner with a football team.

“And it’s not just because of what we could do for the team in terms of winning and that’s one of the reasons I said to them now sponsorship… because this is not about just putting money behind a club, buying some fancy jerseys and it’s not just about winning; I taught some of these guys. In fact, I went to school with some of the parents of some of these guys… So for me is all about also bringing something that could develop the community in a much greater way than just winning a football game… for some of these guys this is what they dream to do, become a professional footballer and too often society tells people with those kinds of dreams that that’s not valid… this is about helping them to fulfill their dreams.”

Montraville Farms is a family-owned business based in St. Kitts, saying that it is “leading a new era in cutting edge, high quality, and efficient food technology.”

CleanRite (started 5 years ago) is a locally owned small business and describes itself as “the leader in servicing St. Kitts & Nevis with Hospitality Standards in the cleaning Market.”

Owner and General manager of CleanRite Quasim Walker and a resident expressed that he thought this opportunity was an effort to give back to his community.

“How do you find ways to give back and not just through football but mentorship and the different avenues that we could help the youngsters move forward… Having a positive group together with one goal, winning championships and [fostering] brotherhood..”

“One of the development projects within the community has been the establishment of free Wi-Fi from the Old Road fishers to Wingfield road. In an effort to provide the community with an Avenue to support the teams by live streaming games given the COVID-19 restrictions on audience attendance at games.

President of the club, Cuthbert expressed the club’s intention to aim for the league championship

“Once again on behalf of the now… Montraville-CleanRite [Old Road United Jets] I say thank you to one and all… for coming on board… as you work with us to become the winners of this [year’s] 2020-2021 FA season.”

The debut game of the club after gaining its two new corporate partners was Friday, April 23 against Newtown which ended with a final score of 2 – 2.

The new partners (contracted for 5 years) are joining KFC who became a “partner” in 2019.