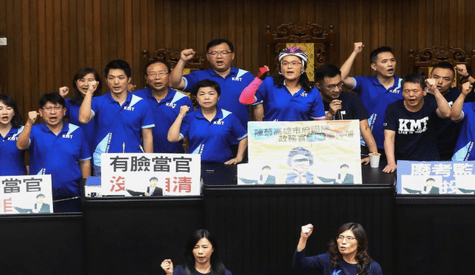 TAIPEI (Reuters) – Taiwan’s main opposition party again occupied parliament on Tuesday to protest against the nomination of a close aide to the president to a top-level watchdog, after fighting with ruling party lawmakers to get into the building.

Violence and protests inside the chamber are not unusual in Taiwan, a spirited democracy where passions often run over.

Last month fights erupted inside the chamber after lawmakers from the ruling Democratic Progressive Party (DPP) broke through barricades erected by the main opposition Kuomintang (KMT) who had occupied it to protest against government “tyranny”.

The KMT has been protesting President Tsai Ing-wen’s nomination of her senior aide Chen Chu to head the Control Yuan, an independent government watchdog, saying it is “political cronyism”.