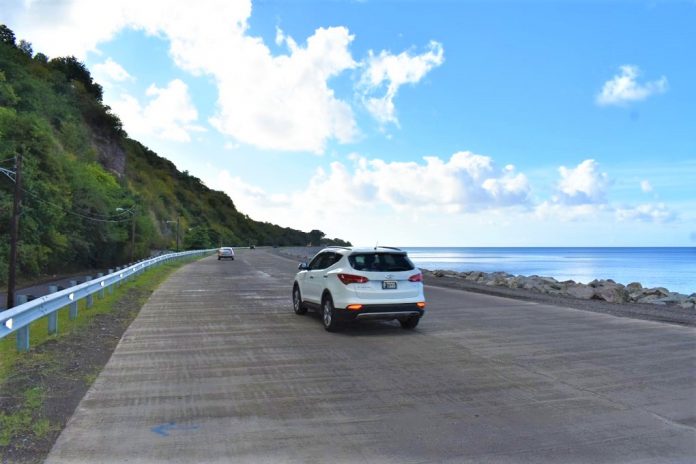 Basseterre, St. Kitts, January 29, 2021 (SKNIS): Construction of the new Old Road Bay Road is not complete, but authorities have allowed traffic to flow on the new road while preparations are being made to resume and complete the project.

On Wednesday’s (January 27, 2021) edition of the radio and television programme Working for You, George Gilbert, Chief Engineer at the Public Works Department, explained that the road was paved with concrete, facilitating the temporary opening of the roadway.

He urged motorists to resist the temptation to speed on the new road.

Mr. Gilbert stated that the contractor is preparing to lay asphalt on the surface of the new road. At that point, access to the new section will be closed off to the public. Motorists will use the pre-existing roadway until the paving, and other works are completed on the new section.

One such task to be completed is the reinforcement of the revetment wall to protect against damage from the sea during severe weather. Dozens of twenty-tonne boulders have already been placed for sea defense. Ten-tonne boulders are now being mined at the quarry to add to the defense wall.

Additionally, engineers will have to merge the ends of the new section to ensure a seamless flow of traffic to the island main road.

Mr. Gilbert said that the project timeline has been altered due to the global COVID-19 pandemic. Many countries implemented a lockdown, thus bringing many industry operations to a halt. This included suppliers of some materials needed for the Old Road Bay Road Project. Shipping of supplies was also a challenge as medical equipment was given priority.

However, Chief Engineer Gilbert expressed confidence that the project will be completed before the end of 2021.