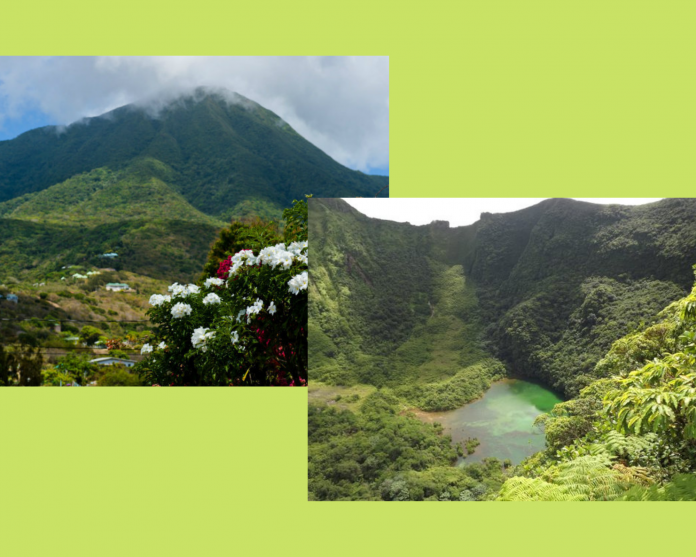 St. Kitts and Nevis (WINN) – With regional focus on volcanoes because of the eruptions of La Soufrière in St. Vincent people of the Federation are seemingly more invested in the status of Mount Liamuiga.

Both Mount Liamuiga and Nevis Peak are live, meaning they have the potential to erupt in the future according to Abdias Samuel, National Disaster Coordinator with the National Emergency Management Agency.

However, Dr. Erouscilla Joseph, Director of the UWI Seismic Research Centre assured the people of the Federation that any observed activity at the crater is normal and shows no signs of violent volcanic activity.

“The activity that was seen in Liamuiga is normal. It’s not unusual. It does not look any different to… what has been seen in the past in terms of how the feature looks, and the type of activity that’s associated with these features that are in the crater. As a matter of fact, in other volcanoes on volcanic areas such as Dominica and St Lucia, you would see even more…. I don’t want to say violent but more effusive activity associated with their hot springs and fumaroles that will actually look a lot more active than what was seen in the video for the Mount Liamuiga features.”

Instead what it shows is geothermal activity.

“To go back to the question about “what is a geothermal system and why does it show these signs at the surface?”… There is magma and depth, beneath the volcano. What happens is it heats the rock above it, so this hot rock is there; and then you have water coming in from the rain that filters through the cracks and so on, on the volcano and it percolates down into the earth, and is heated by the hot rock. The magma itself also de-gases so there’s gas associated with it and together with that hot water that’s heated up and boils, that comes up to the surface and is manifested as the hot springs and the vents and the fumaroles…  this is something that’s seen in most volcanic systems… When a volcanic system becomes more active, you would tend to see changes in the activity as well as the appearance of these features, and this is not what is happening at Liamuiga.”

Apart from La Soufrière another example of volcano tectonic earthquakes have been observed from Mount Pelée on Martinique.

Recently on Martinique 312 volcano-tectonic earthquakes were reported by Volcanological and Seismological Observatory of Martinique (OVSM) of Mount Pelée during the week April 23 – 30, of magnitudes less than or equal to 1.0.

Despite the increase in seismic activity the seismic energy released remains moderate.

OVSM explained that during phases of volcanic reactivation, periods of greater seismic activity often alternate with phases of weaker seismicity.

Activity declined on April 30 but seismic activity continued above baseline. No other change was observed in the activity of Mount Pelée.

The ability to monitor the variations of seismic activity does not predict a specific time but aims to provide enough warning to act.

“We cannot predict volcanic eruptions. What we do do is provide forecasts and warnings… So in terms of the actual date, please and time, that was not something that can accurately be predicted; there is some level of uncertainty, but our aim is to provide enough warning to be able to… try to save lives, and to allow evacuation of people if necessary to avoid harm.”

Dr. Joseph went on to address fears people have about volcanoes in the region being linked and thus, activity at one may awaken activity at another.

“The other concern that people often say is… when one volcano erupts in our region, it’s linked to other volcanoes and other volcanoes can show unrest. That again is not true. The processes… throughout the region that actually allow for the formation of the volcanoes that’s the same yes, it means that we [are] in a subduction zone as I mentioned before, and this is what allows the formation of of volcanic islands, but in terms of the plumbing systems of the volcanoes being linked, no, each volcano is different and has its own plumbing system and one activity at one does not necessarily allow for another one to increase in activity or erupt.”