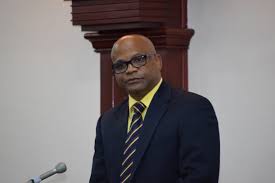 St. Kitts and Nevis (WINN): Member of Parliament for St. Christopher 4 the Hon. Lindsay Grant says he intends to deliver on campaign promises made in sectors such as housing and infrastructure for his constituency before the next general election is called.

When it comes to Half Way Tree, I would hope to add a few more houses…and I would wish to put a road in the Green Acres area…for the area of Lamberts, I would like to refurbish the sporting facility there. I have just mapped out another area for the music studio which I say I would put in. I have the equipment, land, finances, it’s just now to begin [construction of] that music studio which I promised the people of constituency 4 because they have an enormous wealth of musical talent…”

According to Grant, road works have commenced in Half Way Tree and Verchilds. He noted that plans for different areas in Constituency 4 would be revealed soon.

‘Keeping the Promise Live Series’ is hosted by PAM’s Assistant General Secretary Mr. Azard Gumbs and Chair of Young Pamites (Ag.) Ms. Tawanna Wigley and features discussions with members of PAM speaking about the party’s history and the way forward, among other things.