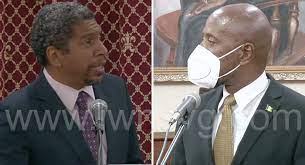 He made the point in Parliament last week during the debate on a bill authorising the government to borrow an additional US$30 million for a new hospital at Arnos Vale.

Bramble said the debate was an opportunity for Finance Minister Camillo Gonsalves to instil confidence in the population but failed to give the requisite information.

However, Gonsalves accused Bramble of not paying attention, saying that the government has been talking about the project for years.

Bramble, like other opposition lawmakers, voted in support of the bill. However, during the debate, he said that when Gonsalves rose to present it, he “quipped that this is the first opportunity he would have as Finance Minister to discuss this project.

“And, I am assuming, in this forum,” Bramble said, adding that he was “really taken aback because, to some extent, that confirmed my own impressions” when he reveied the documents for the meeting of Parliament.