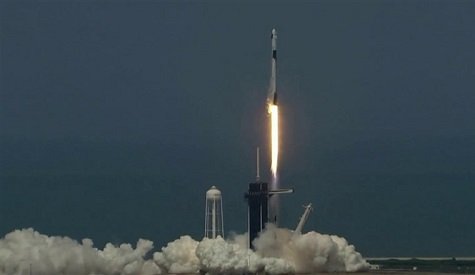 CAPE CANAVERAL, Fla. (Reuters) – SpaceX, the private rocket company of billionaire entrepreneur Elon Musk, launched two Americans toward orbit from Florida on Saturday in a mission that marks the first spaceflight of NASA astronauts from U.S. soil in nine years.

A SpaceX Falcon 9 rocket lifted off from the Kennedy Space Center at 3:22 p.m. EDT (1922 GMT), launching Doug Hurley and Bob Behnken on a 19-hour ride aboard the company’s newly designed Crew Dragon capsule bound for the International Space Station.

Moments before liftoff, Hurley said, “SpaceX we’re go for launch. Let’s light this candle,” paraphrasing the famous phrase uttered on the launch pad in 1961 by Alan Shephard, the first American launched into space.

The craft launched from the same pad used by NASA’s final space shuttle flight, piloted by Hurley, in 2011. Since then, NASA astronauts have had to hitch rides into orbit aboard Russia’s Soyuz spacecraft.