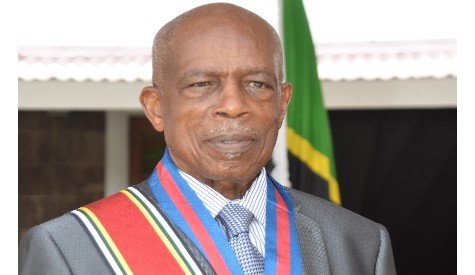 Another recipient of the Order of St. Michael and St. George, Simmonds helped create the People’s Action Movement, and upon St. Kitts’ independence from Great Britain, served as the island’s first Prime Minister.

His early education took place at a private school and then he attended the Basseterre Boys’ School. In 1945, he was awarded a scholarship to the St. Kitts-Nevis Grammar School. He was one of the youngest pupils ever to be taken in. He was consistently at the top of his class in most subject areas. He also developed a keen interest and took a leadership role in sports and extra-curricular activities. In 1954 his results in the Cambridge Higher School Certificate Examination won him the Leeward Island Scholarship.

He worked for a year as Senior Bench Chemist at the Sugar Association Research Laboratory in 1955 in St. Kitts.

Then he decided to continue his education by pursuing a career in medicine, and was duly accepted at the University of the West Indies – Mona.

At UWI, he remained active in sports and gained selection on the University Cricket Team. He was also Secretary of the University’s Cricket Club.

Simmonds went on to graduate in 1962; he did his medical internship at the Kingston Public Hospital, Jamaica in 1963.

He then returned home to St. Kitts in 1964, a qualified Medical Doctor, and began a successful professional practice. His first appointment was in Anguilla in 1964.

He then took a leave of absence in 1966 to pursue Post-graduate studies, first in the Bahamas, where he was Staff Doctor, Chief Resident in Anaesthesiology, and Registrar in Internal Medicine at the Princess Margaret Hospital.

In 1968, he left the Bahamas and went to Pittsburgh, U.S.A., where he did further post-graduate work in Anaesthesiology until 1969 when he returned to St. Kitts once more to his Medical Practice and Political Career.

In 2015, Simmonds became the fifth person to be named as a National Hero by the National Assembly and is the first living person to receive this honor.