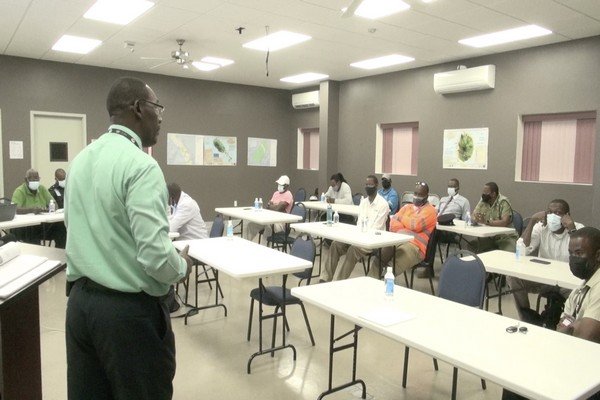 NIA CHARLESTOWN NEVIS (April 16, 2021) — Drone operators on Nevis had the opportunity to contribute to regulations being drafted for the operation of drones by the Government of St. Kitts and Nevis at a briefing hosted by the Ministry of Foreign Affairs and Aviation on April 13, 2021. It was held at the Nevis Disaster Management Department’s conference room at Long Point.

Mr. Royston Griffin, Civil Aviation Officer in the Civil Aviation Division in the Ministry of Foreign Affairs and Aviation, a facilitator at the session, expressed satisfaction with the turnout and the interest.

“It was successful and well attended. The response was positive. They also gave their feedback and concerns and what they would like to see included in the legislation,” he said.

A briefing was also held on St. Kitts for drone operators there on the day before.

Mr. Griffin noted that the aim of the consultation was to provide awareness of the draft drone regulations, receive feedback from the drone operators and to let them know their importance in the process.

“It is important to hear from the stakeholders, giving them the opportunity to understand the importance of developing this legislation and how important the partnership is in developing such,” he told the Department of Information on April 16, 2021.

Mr. Griffin said the legislation being drafted is in keeping with the Federal government’s commitment as one of the 193 signatories to the Chicago Convention by the International Civil Aviation Organisation (ICAO), to ensure safety within St. Kitts and Nevis’ airspace.

“It is in keeping with the international obligation by the government of St. Kitts and Nevis to ensure safe and secure operation of all manned and unmanned aircraft operations within the Federation, in accordance with the International Civil Aviation Organisation Standards and Recommended Practices

The ICAO Annex 2 which speaks to Rules of the Air, states that the rules of the air apply to all aircraft, manned or unmanned. The rules also oblige contracting states to maintain national regulations uniform with ICAO Standards to the greatest possible extent, and to prosecute all persons violating them.

It states that the rule is the basis for international harmonization and interoperability, which is as essential for unmanned as manned operations to be conducted safely.