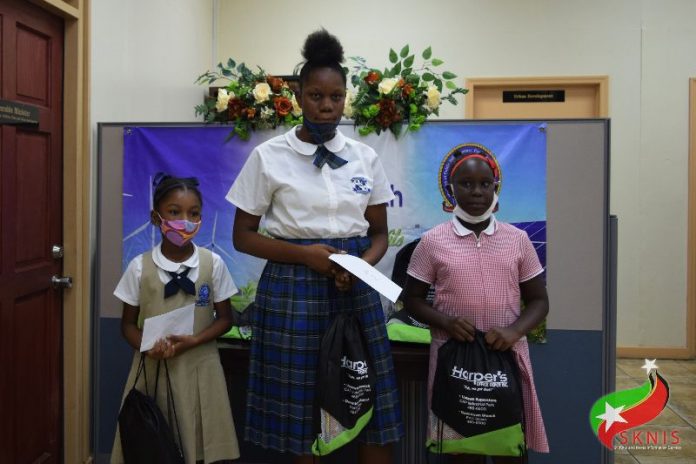 First place was awarded to Akira Williams of the Nevis Montessori Academy. In second and third places were Zahnelle Jeffers of the Saddlers Secondary School and Theia Ballington of the Immaculate Conception Catholic School respectively.

At the ceremony to award the winners, Minister with Responsibility for Energy, the Honourable Shawn Richards, stated that he was happy that the Ministry was able to include the students from the various schools as part of the celebration of Energy Month.

“While it is that most students perhaps do not pay electricity bills, they are not normally the ones who you would see at SKELEC and elsewhere, they are consumers of energy,” he said. “They use energy whether it is within the schools or within their individual homes. However, apart from that, I think it is also important that we engage our students and teach them about energy be it the consumption of energy, renewable energy, etc.”

Minister Richards said that the students have participated in a very important project.

“Apart from developing your artistic skills, you have also to a large extent helped the Government and the energy unit in sending a message to the public,” he said. “As we speak to persons about the resiliency about this particular sector or perhaps making it more resilient, through your artwork you have helped us to send that particular message to the rest of the community here in St. Kitts and Nevis, and for that, we want to say a very special thank you and also congratulations for placing first, second and third in the competition.”

The minister encouraged the students to share what they learned about the energy sector as they participated in the competition.
According to the Communications Officer for the Ministry, Che-Raina Warner, CARICOM Energy Month is celebrated annually in October. She noted that this year marked the third installment since its revival after some years of dormancy.

“These past few years have seen much-added vibrancy and energy through a series of activities to mark the month,” she said. “Hence, guided by this year’s theme, ‘A Resilient Community, Energy at the Center’, our activities such as our Art Contest and Essay Contest were geared to involve all, not excluding the most vibrant and energetic among us, our young people.”
-30-