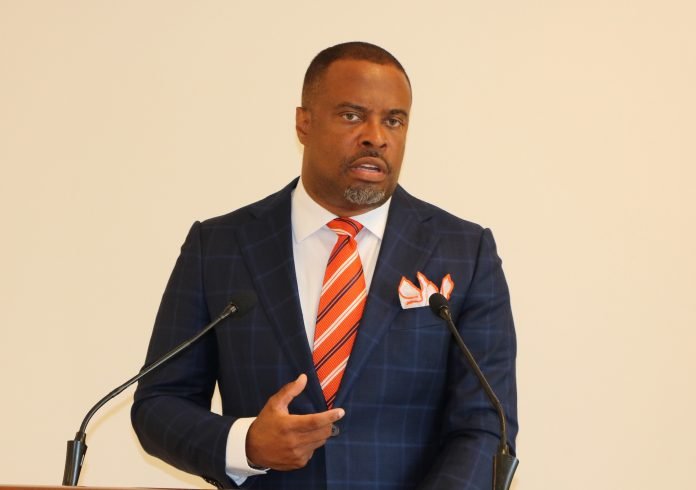 St. Kitts and Nevis (WINN): Premier of Nevis, Hon. Mark Brantley confirms the receipt of a letter from the Nevis Evangelical Association requesting the local administration to desist from scheduling the Nevis Island Assembly Elections in December.

During a town hall meeting hosted by the Concerned Citizens Movement at the Butlers Community Center on Monday night (November 21), Premier Brantley expressed that he respects the church, but he is not pleased with the tone of the letter, nor does he appreciate what seemingly is a threat to the Administration.

“There was a letter written to me as Premier and signed by Reverend Ron Daniel and Reverend Cicely Browne on behalf of the Evangelical Association. I think Nevisians would know that we have two groups: the Christian Council and the Evangelical Association. So they came on behalf of the Evangelical Association and indicated that Advent, which is a holy time of year, starts on November 27 and runs up to, I believe, Christmas Eve and that they wanted an assurance that there will be no election during that time, because of the Holy nature of that period of time. I should say that I welcome, as Premier of Nevis, interactions with the church. The church is an important institution on the island, but I confess that the tone of the letter was a little unfortunate because, in the letter, they indicated that if I were to call an election in December, they will not stand idly by and I wasn’t so sure what they meant by that because I didn’t think it was – just as it will be out of order for me to threaten the church, I think it is out of order for the church to seem to threaten the government. It is within the purview, as a matter of law, of the Premier of Nevis to call an election at any point that he feels to call an election; those are the rules, and that is the law. And as I say, while I welcome interaction with the church, I thought the letter was a little combative when it didn’t need to be.”

In addition, Premier Brantley disclosed that he has officially responded to the letter from the Evangelical Association, declaring that the election will proceed within the parameters of the law. He also questioned the best available time for the hosting of elections, considering the varying periods deemed holy.

“Notwithstanding that, I have responded to the letter, and I’ve indicated to the church that the election will come when it will come, and we just have to deal with it because the truth is that while Advent is certainly a holy time of year, Advent, I believe starts on November 27; it ends on Christmas Eve, I think then there is Christmas Day. Then epiphany starts on January 6, it runs all through February and then Lent starts; Lent runs all through March. Then Easter starts, [and] Easter runs all through April. So when are we [going to] have the election? So the question is, for me, one of respecting the church- because I will never disrespect the church, but also saying to the church that we have a constitutional responsibility to have an election so that the people of Nevis can elect the government of their choice; and so we will have to proceed with respect, but we’ll have to proceed to do what we need to do to ensure that we stay within the bounds of the Constitution because we know that the five years expire on the 19th of December, and then we have an additional 90 or so days, which takes us to about April as a overtime that we will have the election; but that entire period from now until the end of April is a Holy period. There may be some argument among Christians as to whether Advent is holier than Lent or holier than Easter. I don’t know. I’m not qualified to comment, but I know it’s all a holy period. So we have responded.”

Meanwhile, Premier Brantley expressed his displeasure with the circulation of the letter from the Evangelical Association into the public domain, thus stating clearly that the letter was not leaked from his office.

“I should say though, since the question has been posed, that I did have an element of unease and discomfort that a letter written to me by the Evangelical Association could have found its way onto Facebook and in the public domain. I want to give the public the assurance that that did not come from the Premier’s Office. So I’m not sure who would have leaked that letter to the public and what the intent of doing so is. But certainly, as I said, I view the church and always respect the church; respect what they do, but the church will also have to understand that the government has its role to play as well.”

Campaigning continues as the people of Nevis await the official announcement of a date for the local elections.