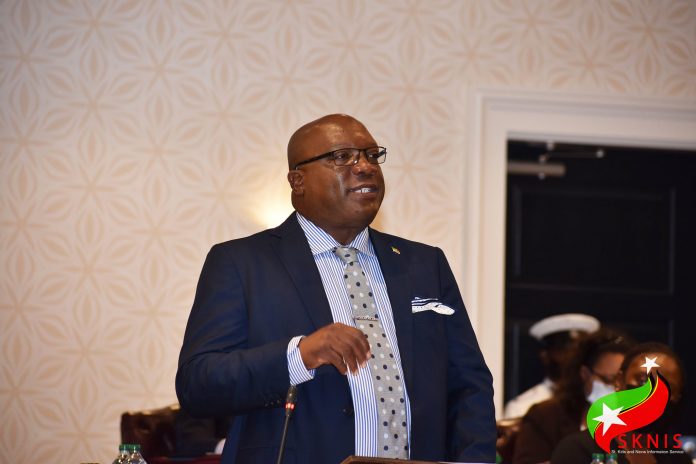 St. Kitts and Nevis (WINN): The matter of Nevis’ share of revenue from the Citizenship By Investment (CBI) Programme has been addressed by Prime Minister and Minister of Finance the Hon. Dr. Timothy Harris.

Speaking at a press conference hosted by the People’s Labour Party (PLP) on Wednesday (Mar. 16), the Prime Minister explained to the nation the agreement established between former Premier of Nevis Vance Amory and the island’s current Premier Hon. Mark Brantley.

“Indeed if the truth be told, every arrangement which we have made in relation to allocations to Nevis, they have come after presentations made to me by the Premiers of Nevis in regard to this matter. Premier Amory came and we had a discussion over what he had proposed, and what he thought then was reasonable. When Premier Amory left, Premier Brantley came and made a proposal to me. We had a discussion and I agreed after consultation with our experts about the sustainability of the program that we will undertake to increase the allocation to Nevis by 50 percent; from $30 million where there was none before to $45 million,” the Finance Minister said.

He continued: “I have never been unreasonable with respect to this matter. I have a federal responsibility and I have the laws of the land to help guide me as well as the technical advice. Those arrangements have always stood and have never been interfered with…but is only part of the story because if the full story had  been told, every year beyond that has been agreed…we have always given Nevis more.”

Prime Minister Harris revealed that in addition to $45 million per year, the Federal Treasury funds social safety programs; pharmaceuticals, and medicines for the hospital and health centers on Nevis; salaries and wages for employees of the Nevis Island Administration as well as for the STEP workers; and the Alternative Lifestyle Pathway Programme better known as the “Peace Program” on Nevis.

Prime Minister Harris also reported that the matter of Nevis’ fair share of the revenue from the CBI Program has never been raised for discussion at Cabinet meetings by Premier Brantley or any other member of Cabinet.

“No one for the record has ever brought to the Cabinet the issue of the fair share. There is no Cabinet submission. No Cabinet memo in relation to that. There have been public expressions of it but it has never come into the Cabinet over which I preside.

Somehow there appears to be the view that Dr. Harris, whose father is a Nevisian and whose mother is a Kittitian, somehow does not want to give somebody their fair share. Nothing further than the truth,” the Prime Minister said.

Premier Brantley, while speaking on his “On the Mark” talk show on Wednesday night following PLP’s Press Conference, supported Prime Minister Harris’ claim that prior to 2015, Nevis got nought of the revenue from the CBI Program.

However, Brantley confirmed that since 2015, Nevis has gotten revenue from the CBI Programme but he argues that more should be allocated based on an agreement established within Team Unity prior to assuming office in 2015.