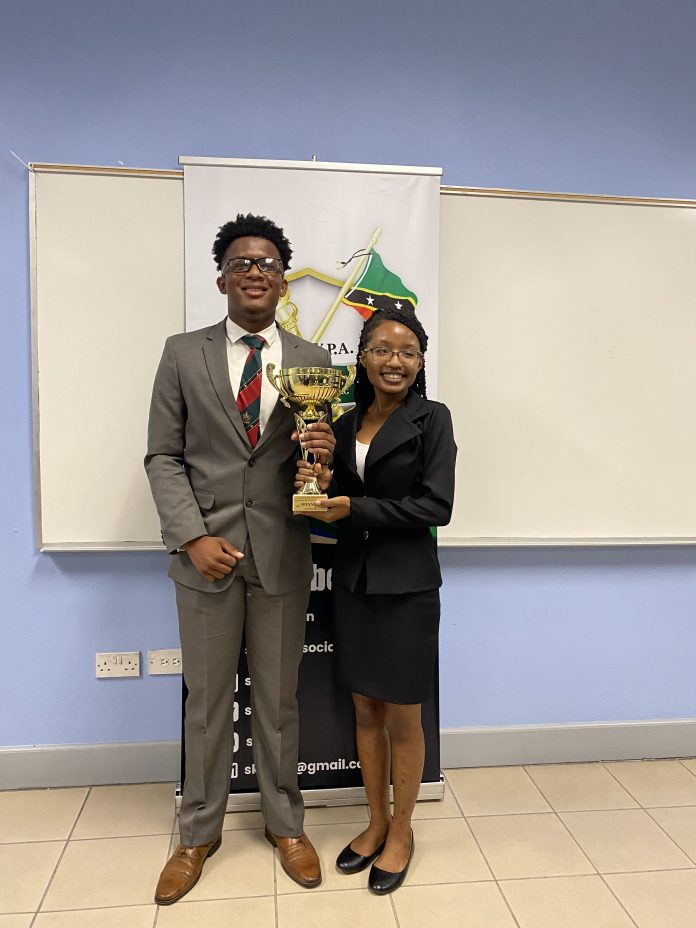 Mr. Nisbett’s two-member team, the Nevis delegation, which also consisted of Ms. Zahra Trotman, emerged winners with 560 points following a robust debate on the moot: “This House believes that the mandatory vaccination of all citizens without severe underlying health issues is the most effective way to reach herd immunity during this COVID-19 pandemic.”

The SKNYPA delegation, headed by Mr. Darin Connor as Leader of the Opposition, secured the second place spot overall with 471 points and saw its member, Ms. Maleah Erskine, among the top three speakers in third place.

Held on Wednesday, September 22 at the Poinciana Conference Room of the Clarence Fitzroy Bryant College (CFBC), Mr. Nisbett, who acted as Prime Minister on the upper government side of the house, opened the debate in full support of the moot and stressed that mandatory vaccination is the best way out of the COVID-19 pandemic.

According to Prime Minister Nisbett, “we have decades of scientific history which demonstrates the effectiveness of mandatory vaccination in eradicating numerous diseases,” he said, adding that “all of us were subject to mandatory vaccination for measles, mumps and several other diseases because otherwise, we could not enter school without it so there is no need to act as if vaccination is the Boogie Man”.

In his presentation, Mr. Nisbett made the point that if mandatory vaccinations helped us to eradicate diseases such as Smallpox, Polio, and Measles, it will also do the same for the coronavirus.

Ms. Trotman, who acted as Deputy Prime Minister, further reinforced Mr. Nisbett’s position on mandatory vaccination when she referenced chapter II section 5, subsection 1 (h) of the Constitution of St. Christopher and Nevis which states that “A person shall not be deprived of his or her personal liberty save as may be authorised by law in any of the following cases, that is to say, for the purpose of preventing the spread of an infectious or contagious disease”.

She said “the fundamental rights of our citizens are not being infringed upon. My government’s position is protected by the most supreme law of the federation. The mandatory vaccination is also protected by the Public Health Act of St. Christopher and Nevis.”

Also participating in the debate were Ms. Dariela Warner and Ms. Kadeisjah Egen for the CFBC Literary and Debating Society- Lower Opposition.

The debate was adjudicated by a panel of judges which consisted of Mrs. Colinicia Levine, an English teacher, and Attorneys-at-Law Mr. Azard Gumbs and Ms. Lanein Blanchette.

Celebrations for the 20th anniversary of the St. Kitts National Youth Parliament Association will culminate on Sunday, September 26, 2021, with an Annual General Meeting.