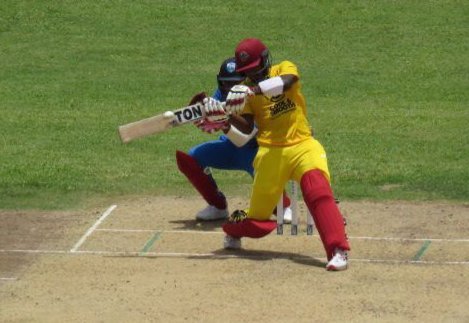 NIA CHARLESTOWN NEVIS – – Nevisian cricketer Anderson Amurdan has been highlighted for his breakout performance on the opening day of the Cricket West Indies (CWI) Rising Stars U19s High Performance trial series which got underway on Sunday, August 08, 2021, in Antigua.

According to windiescricket.com Amurdan scored a “superb unbeaten century” to stand out as the highlight of the opening match.

“The right-hander from Nevis made 117 not out off 151 balls in a hugely impressive performance for Yellow Flamingos against Blue Dolphins at the Sir Vivian Richards Cricket Ground.”

Amurdan is one of five young cricketers from Nevis selected to showcase in the trial series, which is a key part of CWI’s investment in development and preparations for the players for the ICC U19 World Cup to be played in the West Indies early in 2022.

Amurdan, along with Jaden Carmichael, Akadianto Willett, Carlon Bowen-Tuckett, and Onaje Amory were among seven players selected from the Leeward Islands. A total of 56 young players from the Leewards, Winward Islands, Barbados, Jamaica and Guyana were selected for the trials.

Hon. Eric Evelyn, Minister of Sports in the Nevis Island Administration (NIA), said he is exceptionally proud of the young athletes.

“When I heard the news I was struck and in awe and I was extremely happy for these five talented cricketers. Of course I would have seen the five of them on the field of play numerous times at some of the tournaments that we’ve had, and I think that our young cricketers are at the stage now where they are ready and willing to take their talent and expertise to the next level; that is, the West Indies Under 19 team.

The Trial Series, which will run until August 14, consists of eight 50-over matches with players divided into four squads of 14. The top two teams will face each other and third and fourth place teams will square off on August 14.

All four trial matches will be available on www.windiescricket.com and the “Windies Cricket” YouTube channel https://bit.ly/WindiesCricketYouTube.

At the culmination of the trial matches, a squad of 18 players will be selected for the West Indies Rising Stars U19 tour of England, which will feature six Youth One-Day Internationals from September 04 to September 17, according to CWI.

Minister Evelyn says it would be a great achievement if all five cricketrs from Nevis make the final cut. He commended the Department of Sports’ and former WI batsman Keith Arthurton’s cricket programmes for providing training and development in the sport.

“I believe that these five talented cricketers would have gone through some of the programmes that we have at the Department of Sports…and it shows that they have done well. I believe these guys have been taking the training very seriously. These are young cricketers who believe that they can make it, and it’s because they have been consistent in what they are doing with their practice and being committed to the game of cricket why they have gotten this far to be selected into this training squad for the West Indies Under 19 team,” he said.

He also congratulated the parents of the young men for their contribution and support of the aspirations of their children.

Mr. Evelyn encouraged adult cricketers as well to pursue the sport with earnest as there are now a lot of opportunities and money to be made in cricket.