Nevisians Feature in Second Round of Windies Under 19 Trials 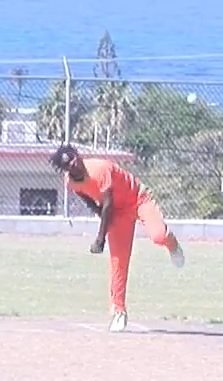 St. Kitts and Nevis (Sports Page) – The second round of trial matches for the West Indies under 19 cricketers, took place on Wednesday 11th August.

Game one was played at the Sir Vivian Richards Stadium, where the Yellow Flamingos engaged the Red Dragons.

Skipper Carlon Bowens Tuckett, of Nevis, lost the toss for the Flamingos but was sent in to bat first.

They were off to a walloping start, with Anderson Amurdan of Nevis, continuing his fine form, in partnership with Nandu.

The team eventually amassed a healthy 265 for 7 from their 50 overs.

Skipper Carlon Bowens Tuckett was lbw for just 1 on this occasion.

The Red Dragons in response were unceremoniously bundled out for a mere 79 runs.

Nathan Edwards of St. Maarten and the Leeward Islands, bagged 5 for 23, to be their main tormentor.

Meanwhile, at the Coolidge grounds, the Blue Dolphins engaged the Green Pitons.

The Pitons batted first and on the back of a fine century from Clarke and a cultured half-century from Roopchand amassed a virtually unassailable 310.

Akadianto Willet of Nevis bowled in this game and despite showing some obvious nerves got 1 wicket for 35.

The Dolphins in response flipped out at 89 all out.

They were seriously undermined by Nevisian left arm leg spinner, Jayden Carmichael, who bagged 4 for 28.