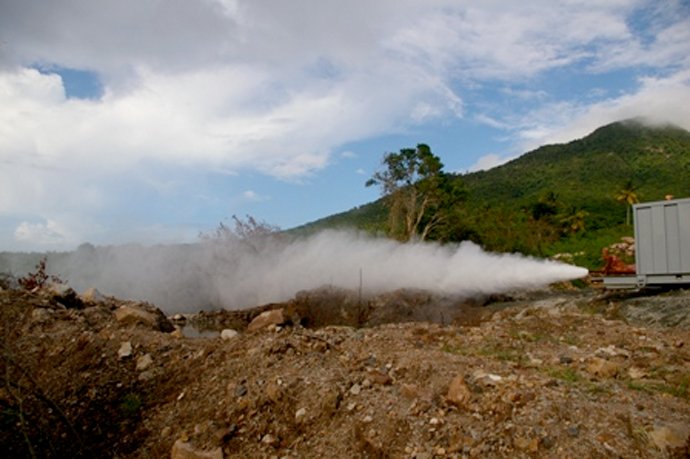 St. Kitts and Nevis (WINN) The village of Hamilton Estate is one of the main areas identified for Geothermal well drilling on Nevis, with the first exploratory drilling in 2008 under the Nevis Reformation Party-led Administration and again in 2017 by the Concerned Citizens Movement Administration.

Still, in 2022, Geothermal is a major talking point, with the most recent attempt of well drilling in Hamilton Estate being a failure, as revealed by the General Manager of the Nevis Electricity Company.

During a recent Geothermal Well Drilling Focus Area Public Consultation, a resident of Hamilton who lives next to the 2017 drilling site complained of odorous smog discharged from the well and was more prevalent during evenings. He questioned the possible cause of that strange odour and whether drilling would continue at the specific site again.

In response, Mr Albert Gordon- General Manager of NEVLEC, revealed that the most recent well had some issues and was not dug according to international best practices, which was determined by drilling engineers from Geothermix and New Zealand.

“From what I understand from the literature regarding that well, there may have been some issues with it. I won’t speak to the specifics, but I have some experts online who can speak better; but that well, as far as I know, was not drilled according to best practice or best standard. So, in fact, what we’re going to do is going to be much different. It’s going to be according to international best practices, and we’re going to make sure we have suitably qualified contractors.”

Gordon further explained, “Those were what we call slim wells, smaller wells which were mainly used to test the resource. The ones we’re going to do now are bigger wells which will be used to provide the energy to drive the power plant. So, we’re going for the real thing this time. In doing that and in the interest of transparency again, I’ll tell you we first did an assessment of those wells on the site. As mentioned, drilling engineers that we have on board from Geothermix and from New Zealand identified certain issues with that well; and the older one, because of its age and possible corrosion, may also have some challenges.”

According to the General Manager of NEVLEC, the well dug in 2017 at Hamilton is inaccessible to the public and will be plugged and abandoned before the larger production wells are drilled.

“So, that particular last well, what we have established is that before we start doing the larger production wells now, we have to do what is called plug and abandon for that well, meaning that we’re going to seal it off [and] pour concrete down; but it has to be done in a responsible manner because that well I think, was not done according to the standard we desire. So if you look at the site now, you will notice that we have fenced it around because we don’t want people to access it. It was not done to the standard that we want, and so we are going to plug and abandon it and the next wells will be of a totally different standard.”

Former Premier of Nevis and Leader of the Nevis Reformation Party – Joseph Parry, led Nevis into its first Geothermal exploration in 2008 through West Indies Power. The Environmental Impact Assessments were completed in 2010, and the Administration indicated that it was awaiting financing to move forward. Following the Nevis Island Assembly Elections in 2011, the Concerned Citizens Movement took over leadership of the country. In 2014, the Administration ended the Geothermal contract, sharing the notion that progress was not being made, thus paving the way for a new deal to develop the project.

During the Thursday, December 1 edition of “Tell Me” on 2020 Vision Radio, the former Premier said he was not surprised to hear about the failure of the drilling project. He called for an investigation into the matter.

“Even when the well was being dug, there were people who were saying that the guys who were involved in the drilling were not experts. I heard it. I have kept in touch with people who know about Geothermal, and I was told there was somebody from Dominica and other places, and they were technicians. They were not experts. So, I am not surprised to hear what I am hearing from the Manager for NEVLEC.”

Parry added, “I am saying that the Nevis Island Administration was complicit. They were complicit that they were involved in shenanigans. They knew what they were doing. It was election time. It is there; a “flim-flam” for the people of Nevis, to fool them once again; because every election time they make sure they come up with some gimmickry to fool the people of Nevis. So, you need to have a full investigation, a full investigation into this matter here. “Did the Government know? Did the Chairman know? Did all those persons associated with the Nevis company know? Did they know? and if they [do] know, what?” The monies of the Nevis Government cannot always be wasted. “Did the Premier know?” His legal company was involved. “What did they know? What did they understand? Did they know that they were dealing with people of a certain calibre?” If not, steps would have to be taken. This matter is serious, absolutely serious.”

Currently, the procurement of a drilling engineer is underway.