New Cabinet sworn in and portfolios assigned; Parliament to convene within 90 days 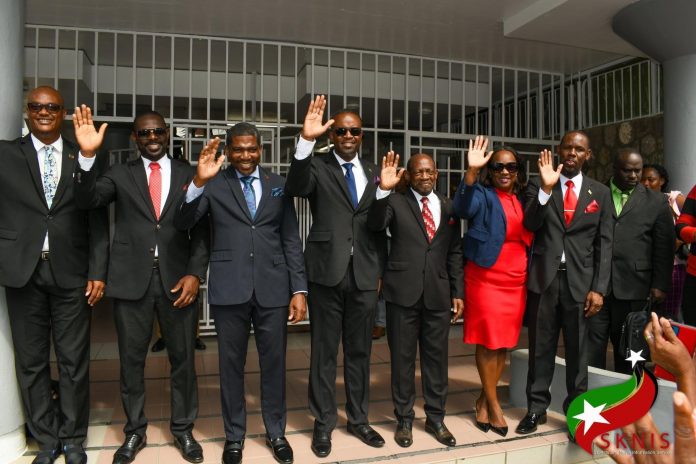 by Kevon Browne
St. Kitts and Nevis (WINN): Portfolios have now been assigned to the recently elected Members of Parliament on the government bench for the St. Kitts Nevis Labour Party (SKNLP).
The Hon. Dr. Terrance Michael Drew, who was sworn in as Prime Minister on August 06, 2022, will be responsible for Finance, National Security, Health, Social Security, Citizenship and Immigration.
The Hon. Dr. Geoffrey Ian Hanley has been appointed Deputy Prime Minister and Minister of Education, Youth, Social Development, Gender Affairs, Ageing and Disabilities. Rt. Hon. Dr. Denzil Llewellyn Douglas has been appointed Minister of Foreign Affairs, Economic Development, International Trade, Investment, Industry and Commerce.
Hon. Konris Maynard is the new Minister of Public Infrastructure and Utilities, Transport, Information Communication Technology and Posts. The Ministries of Agriculture, Fisheries, Marine Resources, Entrepreneurship, Creative Economy and Cooperatives have been assigned to Hon. Samal Duggins.
Hon. Marsha Tamika Henderson has been appointed Minister of Tourism, Civil Aviation and Urban Development. Hon. Garth Wilkin has been appointed Attorney General and Minister of Justice and Legal Affairs.
Two other Senators have been appointed to serve in the Cabinet. Hon. Dr. Joyelle Clarke has been appointed Minister of Sustainable Development, Environment, Climate Action and Constituency Empowerment.
The Hon. Isalean Phillip was also appointed a Senator.
In brief remarks following the swearing-in of ministers, Prime Minister Drew thanked the guests for their attendance at the ceremony and to the citizens and residents of the Federation for their support in the General Elections.
The minister emphasised that while the election results would continue to be analysed, the country’s business must commence under the new administration.
During his address, the Prime Minister announced that “forthwith” the COVID-19 travel restrictions be removed and declared the Federation open for business.
According to the Constitution of St. Kitts and Nevis, parliament is set to convene within 90 days after the General Elections, and the newly sworn-in Cabinet will continue the business of the Federation.
WhatsApp
Facebook
Twitter
Linkedin
Email
Print
Previous articleSuperintendent of Police outlined challenges at post election victory motorcade
Next articleAnne Heche dies of crash injuries after life support removed