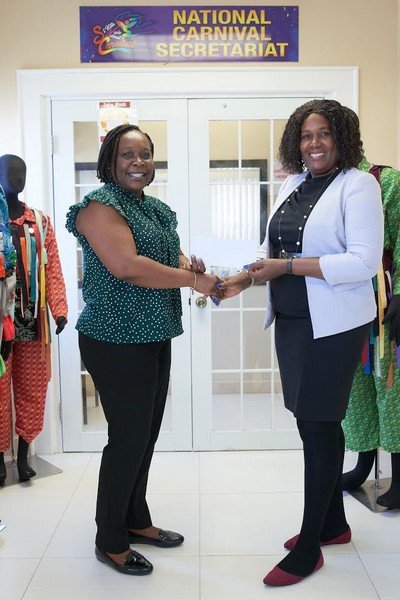 The slogan for the celebration of the Fiftieth Anniversary of carnival in St. Kitts & Nevis has been selected, from a long list of entries submitted over the past few months by citizens across the two islands.

The National Carnival Committee, (NCC), said it was looking for a slogan that would be creative, catchy, simple, and one that would capture the true essence of Sugar Mas 50.

One other important stipulation was that the slogan could not be more than 10 syllables in length.

In response to this appeal, over 200 entries were submitted, after the contest was opened in May this year.

It was penned by Jasmine Warner-Weekes of Sandy Point, St. Kitts.

There is no doubt that when it comes to the kaleidoscope of colour and overall display seen on Parade Day, J’ouvert, and at the Pageants, St. Kitts & Nevis’ carnival produces great Vibe, filled with Energy and mixed in a melting pot of people, having the greatest Fun that can be imagined anywhere in the world.

Weekes told the Carnival Committee that this was the very first time she entered the competition. “I am very elated to have been told that I am the winner of the Carnival Slogan Competition.”

But Weekes said that she was very surprised when she got the call confirming her as the winner. “I did it just for the fun of it. I have never taken part in a competition of this nature, but because of my love for carnival and culture, I just took the chance to do so.”

“Of course, having missed carnival last year, and being someone who loves the culture and the carnival…I thought I would take a try, and just to give the idea of coming back to a carnival with Fun, Vibe & Energy, I thought it was an appropriate slogan, so that’s why I chose it,” said Weekes.