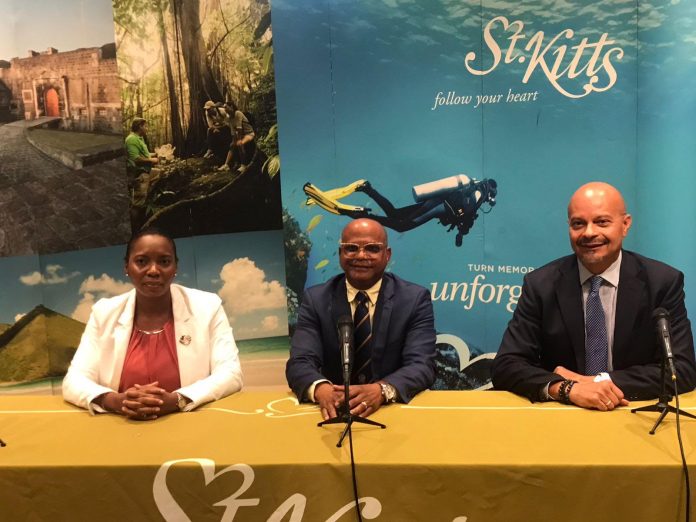 Now on the heels of the fourth wave of COVID-19 transmission in the Federation, the impact on cruise tourism is improving.

In January, the St. Kitts Tourism Authority (SKTA) reported 40 of 92 cruise calls cancelled; things began to improve in February with only ten cancellations of the 75 calls scheduled.

Projections for March are positive with 85 calls expected. These details were confirmed by the Minister of Tourism, Transport and Ports during his monthly Press Conference today (February 23).

The schedule for April is currently being finalised.

However, the sector is not without its problems. For some time, an issue plaguing the sector has been complaints from taxi and tour operators concerning dispatching at Port Zante, especially at the restart of cruise tourism in August of last year.

The Minister provided this update on the resolution of those matters from the perspective of Tourism officials.

“Having had several meetings with the three presidents of the Waxi Associations, we’ve arrived at an amicable agreement in terms of the dispatching process at Port Zante. All three taxi presidents have signed off on that agreement for their membership. So we don’t foresee a challenge moving forward based upon the agreement they have made with the St. Kitts Tourism Authority and the Ministry of Tourism. So those matters have been ironed out.”

“We had 144 persons going over to Cockleshell beach via our independent taxis; 41 taxis were dispatched yesterday, and we had a total of 304 persons patronising those independent drivers. And so we’re very pleased with these numbers because it means that slowly but surely we are getting back to that place [of normalcy]. Our taxi operators, I was told, they were very happy. We did not have any confusion or anything yesterday at the dispatching point. The agreement seems to be working. And so we are very excited for our taxi and tour operators who are able to earn again from the industry and so that is looking very positive.”

WINN spoke with the new CEO of the SKTA, Mr. Ellison “Tommy” Thompson, on the concerns stakeholders have communicated to him since taking the post.

Thompson says the SKTA will work more on positioning St. Kitts in the marketplace to drive interest in the island as a desirable destination.

Two markets he is actively working on securing for the future of the Tourism product is Romance.

“One of the areas I’m definitely going to be going after is romance, that is huge business and also helps with the on-island spend because people are coming for a wedding or a honeymoon, they got a little extra cash to spend. And so that’s going to help us, and it also brings in the other entrepreneurs on St. Kitts who provide services, so the money then spills through the economy. We also want to look at how we get better groups into the destination. Again, that’s a factor of the airlift. As we said earlier, that’s a bit of a challenge at the moment, but I see that improving.”

The other opportunity for St. Kitts to explore and exploit is Sports. However, that is still in the beginning stages on the agenda for the SKTA.

“That is definitely on the radar. We have not finalised a strategy on that, but one of the things we have to do is get an audit of what is available, sports facility-wise, so that we’re being very surgical in terms of the groups or the activities that we go after. But it’s definitely a huge market, very lucrative, and it’s definitely one that we have in the plans.”