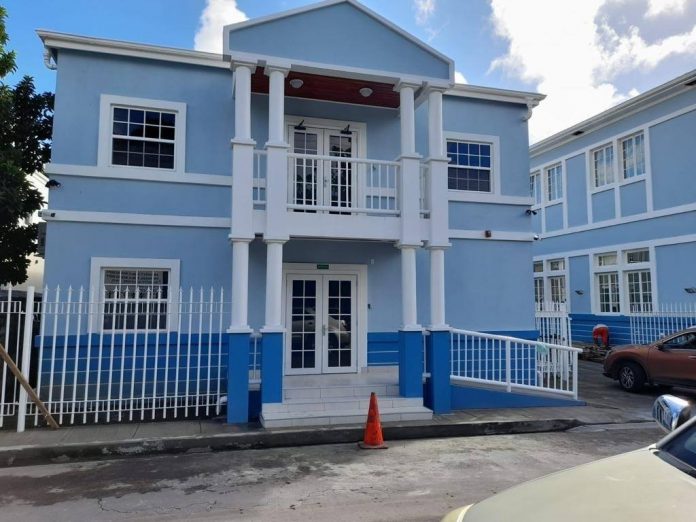 The new Court Annex was named in honour of His Excellency Sir Tapley Seaton, Governor-General of St. Kitts and Nevis.

“Not only was he the president of the St. Kitts-Nevis Bar Association, president of the Rotary Club, Vice President of the OECS Bar Association and later its president, but he was always on standby to fit any civic slot which needed high level, professional attention. So we thank you, Sir Tapley, for all that you have done and all that you will do in the future. Commendations and this signal honour today,” said Prime Minister the Hon Dr Timothy Harris about the Governor-General in his remarks to mark the occasion.

Acting Senior Magistrate, His Honour Mr Renold Benjamin, outlined that the new Annex will focus on family matters and night court, alleviating some of the backlogs the judicial system has been experiencing.

“The court third court by its intimate setting will deal with civil, family and juvenile matters. In February of this year, we started our Night Court dealing with the traffic cases from 5 p.m. until 8 p.m. With the coming of stream of the third court when the logistics are implemented, we are hoping to deal with family matters in the evening in this court.”

The lockdown and other movement restrictions primarily caused the backlog because of the spread of COVID-19 in the Federation.

President of the St. Kitts-Nevis Bar Association, Mr Garth Wilkin, said the association was pleased with the opening of the new Annex, especially with the opening of a third Magistrate’s Court as that court is the most used court in the Federation and can now offer swifter service.

“The new Magistrate’s Court is welcomed as three magistrates can now sit simultaneously In District A and attend to the numerous matters which engulf the court on a daily basis. There is no institution of justice in this federation that touches and impacts the general public more than the Magistrate’s Court. Therefore, the efficiency of and access to that court is of the utmost importance to all. The Bar is therefore pleased that one more court will be put into operation to provide the swiftest possible justice for our clients,” said the President of the Bar Association in his remarks.

Attorney General and Minister of Justice and Legal Affairs, the Hon Vincent Byron Jr., spoke of the investments made in mediation with the mediation centre in the Annex and the continued efforts to have locally trained mediators.

“[Last year] the Court, Cheif Justice and others were able to help us to get the first cohort of trainees to go through a mediation hearing, and that went well… And again this year, earlier this year, we have had another training of a cohort of 25 individuals. And as you have heard, we have the whole gamut of professions of people coming forward volunteering to be part of this process,” said the Attorney-General.

“And have a cohort, a whole list of people that you as a litigant, someone who wants to do mediation can agree with the other side on someone you have confidence in to assist you to settle your matter.”

Prime Minister Harris said that while he is pleased with the opening of the new Annex, he hopes this is just the beginning of investment in the Justice System.

“We believe, of course, that this is an important undertaking that we are doing and I’m delighted to have come to be part of the grand opening of the Courthouse Annex with its Magistrate’s Court centre, its state of the art library, and it’s mediation rooms, all of which together, reduce waiting times and increase the standards of our legal system. While I’m proud of today’s concrete achievements, I hope that it is only the beginning. Because I ensure my good friend and teacher, the Honorable Attorney-General will, want a lot more things to happen to advance the cause of justice in our Federation. And so, I pledge as Prime Minister and Minister of Finance to continue supporting these investments throughout toward a legal system. The aim is that we deliver the rule of law and the prosperity that all of the citizens and residents of St. Kitts and Nevis deserve.”

Construction of the facility began in 2019, completed this year which features a third magistrate court for District A, a three-room Mediation centre and a Law Library.