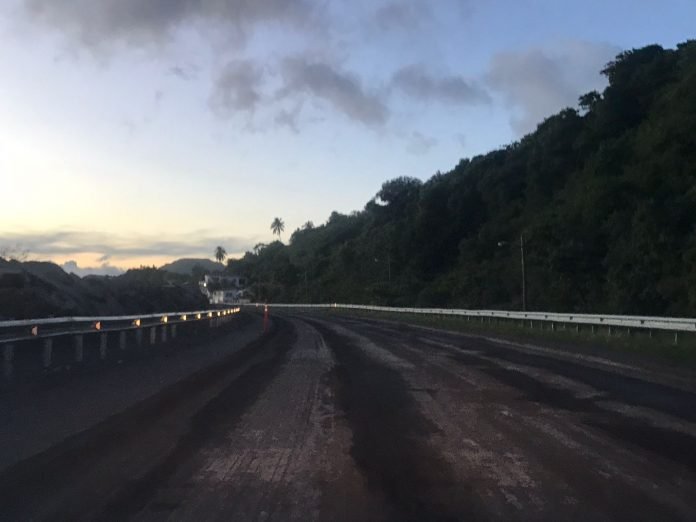 St. Kitts and Nevis (WINN): The Public Works Department issued a notice on behalf of contractors Rock and Dirt Limited and Surrey paving and aggregates of new road work being undertaken on the new road at Old Road Bay.

On Monday (October 24), road users reported that the asphalt on a section of Old Road Bay had been removed. Road users were surprised despite the notice posted to the Ministry of Public Infrastructure’s Facebook page on October 19.

In conversation with WINN, Alexis Hazel, owner of Rock and Dirt Construction Limited, said the road corrections are underway because they were unsatisfied with the construction of the initial road.

“We are not satisfied as the contractor on the outcome of the road. We voiced our concern about putting down four inches of asphalt one time. That’s a really risky way of doing asphalting, but we signed a contract that [has] the details in the way they want the road done. However, we proved to them when we do it that way, what will happen; you don’t have the compaction you need underneath. So, therefore you don’t get a proper finished product.”

Hazel said the general public does not have to worry about their tax dollars paying for the work as it is of no cost to the government.

“There is no cost to the government, what we’re doing now… it’s agreed with the consultant along with Rock & Dirt that we are going to mill off the four inches of asphalt we put on, and we’re going to redo it in two-inch layers to achieve the same four inches that the contract speaks about… there is no cost to the government; the cost is [on] Rock & Dirt and the insurance for that project.”

The former administration and Rock & Dirt signed the initial contract for the $31.8 million road rehabilitation project in 2019.

There is no specific date for the completion of the work, but it is expected to be finished by the end of 2022. The Ministry cautioned motorists to drive with caution and obey the road signs and flagmen.