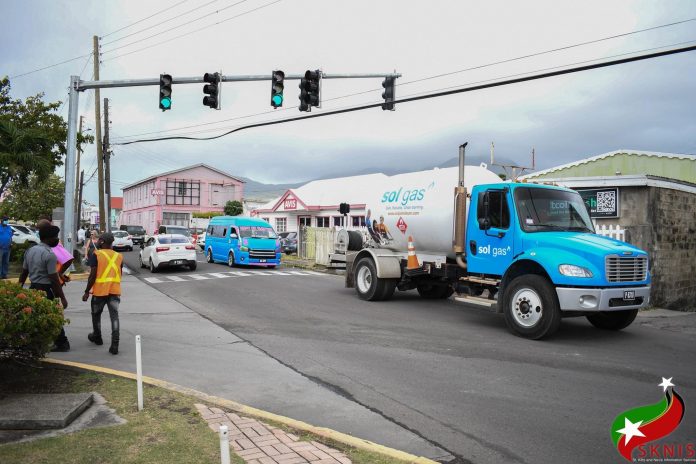 St. Kitts and Nevis (WINN): The new changes to the flow of traffic in the Basseterre area continue to be an issue for motorists and pedestrians, according to the Police.

Sergeant Henry of the Traffic Department in the Royal St. Christopher and Nevis Police Force spent some time explaining where people can and cannot turn since the commissioning of the new traffic light in the Basseterre area.

“We have at Wellington Road by the Horsfords gas station Leonard Dickenson Street and Wellington Road; if you’re travelling from Baker’s corner going to the airport, you’re not supposed to turn right. The only place you can turn [right] when you are travelling there is before you meet the gas station. You can turn by the automotive division – the Horsfords showroom. You can also come on the street right opposite that and across the road, but when you reach the gas station, you cannot turn right. For you to get into the gas station, it has to come from the airport’s [direction and going to Baker’s Corner. We also have been no entry signs that are up; if you’re driving from Baker’s corner going to the airport, you will see one on your left before you meet the road by Ms Slack Pre-school. When you’re coming down from the airport, you will see one on your left, [at] by the gas station telling you you cannot turn across the traffic. For College Street Ghaut, if you’re travelling from the [Basseterre] Police Station to [Springfield] Cemetery, you cannot turn up [right] College Street Ghaut. If you’re coming from the Cemetery going to the Basseterre Police Station, you cannot turn down [right], and you’re not supposed to turn [right] on Church Street either,” said Sergeant Henry during the April 4 broadcast of Traffic Talk on WINN’s Island Tea. 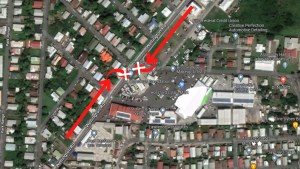 She continued, “If you come down to College Street Ghaut and Liverpool Row, [there was a stop sign] by the National Caribbean Insurance (NCIS) in College Street Ghaut. The stop sign has been removed from there, so you proceed straight [down the Ghaut]. If you’re coming from Market Street into Liverpool Row, there is now a stop sign there; you must stop and proceed with caution, make sure that nothing is coming in you’re travelling out of that road… if you’re coming from the Bay Road [from the Bassterre] Fisheries, you cannot turn into Wrigley Alley, just behind the Sands Complex; you cannot turn across into Sands complex either because there’s a sign saying no right turn. If you’re coming out from the Sands Complex, you can turn left to go up [the Industrial Site]. You cannot turn right… you cannot take her left to go into town.” 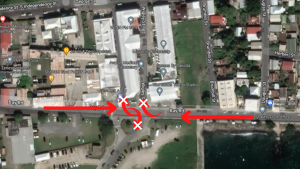 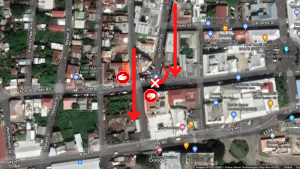 Henry indicated that the Traffic Department is educating during this period as these restrictions are new; however, they will likely start ticketing and prosecuting individuals shortly.

The biggest tip with the new traffic flow is one should avoid turning right; so long as turning right will have a motorist cutting across traffic, that turn is not allowed.

Henry indicated that the police had observed that motorists were not adhering to the traffic lights at Sandown Road and Wellington Road. Henry said people are still using those roads in the manner that existed before the commissioning of the traffic lights there.

“I know it is something new for us, but when you are coming from the fisheries or from Port Zante’s direction, there is a light by Sandown Road and the Bay Road; please to remember that there is a light. When you reach, and you already pass [it] is when you remember, so I am asking you to please to remember that. And also on Wellington road, people are still running the red lights on Wellington road.”

A caller into the program expressed discontent with what he called the “trial and error approach” to the new traffic restrictions in the country’s capital.

He added, “[They] are making things more difficult and [there is] more gasoline consumption to get around in Basseterre. But, like everything else, we’ll watch and see. There was not even a consensus where you ask people what they think and how they feel; you just give it to them… to me, that is not the way it should have been done, but time will tell.”

Later another called suggested that instead of focusing on the movement of traffic on a “street by street or junction by junction basis”, the entirety of Basseterre should be holistically considered and examined to figure out the most efficient approach to the movement of goods and people within and around Basseterre.

In closing, Sergeant Henry urged pedestrians to use the crosswalks made available instead of crossing the streets at any point, as jaywalking in the Federation is a ticketable offence.