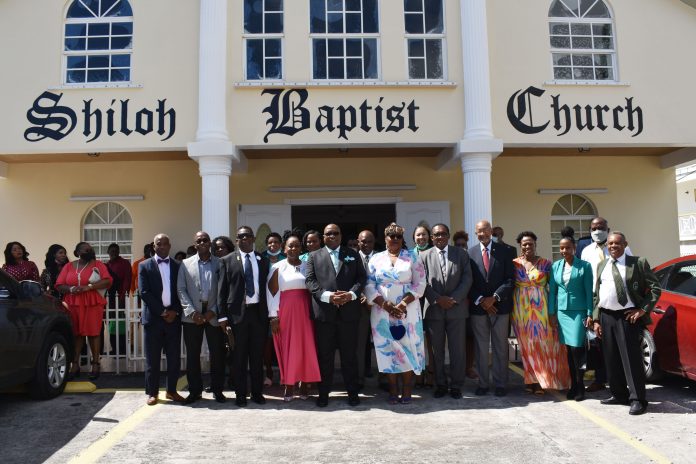 CHARLESTOWN, NEVIS, February 8, 2021 (MMS-SKN) — The St. Christopher and Nevis Social Security Board, which is celebrating its 43rd anniversary, is one of the organisations that have been uniting the people of the two islands and is the strongest in the region, but with time it is facing challenges which call for a new vision.

Federal Minister with responsibility for Social Security, the Hon Eugene Hamilton, has said that the institution which has helped to provide incomes for persons over the age 62 who are retired and without income is presently paying out more than it is receiving in collections. To remedy the situation he has strengthened the institution’s Board by appointing persons with strong financial skills who will ensure that its income is greater than its expenditure.

“Social Security has its challenges, and it calls for a new vision,” said the Hon Hamilton on Sunday, February 7. “Let me explain to you what I mean: When this institution started in 1978, the first year it operated, there was $3.3 million dollars in collection. There was only $174,000 in benefits paid.”

In contrast, the Social Security Board received $99.6 million as collections in 2019, but the benefits paid were $101.4 million.

“What does that say to us?” posed the Honourable Minister. “That says to us that we have to take a closer look at the way the institution is heading and cut a path that brings this institution to the point where income is greater than expenditure. That basically is what it calls for us to do if we are to ensure that some of you young ones who are paying social security now get a benefit when you get to age 62.”

The Hon Hamilton who is also the Federal Minister of Human Settlement, National Health Insurance, Ecclesiastical Affairs, Social Development and Gender Affairs, made the remarks at a thanksgiving service held at the Shiloh Baptist Church in Charlestown, Nevis, in celebration of Social Security’s 43rd anniversary.

The service was also attended by Prime Minister Dr the Hon Timothy Harris who is also the Federal Minister of Finance.

“It is why I have strengthened the Board of the organisation with persons of important financial skills to be able to help us to get on that road, so that again, we can see the organisation lengthening its life,” pointed out the Hon Hamilton. “That is the mission.”

“This is a period when we have to pay attention to what Covid has done to us,” advised the Hon Hamilton. “In 2020, January the total wages in the Federation were about $85.7 million dollars, by October it went down to $58.1 million. One shock from Covid reduced the revenue base in the entire country from $85 million to $58 million, so we have to be thrifty in our approach. This is why I have charged the Board with the responsibility to pay attention and to make sure that this institution remains strong as we go through the 2020s providing benefits to those who are in need of benefits.”

In spite of the challenges, Minister Hamilton assured that the St. Christopher and Nevis Social Security Board remained the most prolific contributor during the period of Covid, as it paid out over $8,500 persons from a stimulus package during that period. It paid a total of $22,739,441.94 in stimulus package in the months April, May, June, and September.

“Today as we celebrate 43 years, we celebrate an institution that despite all of the challenges it is the strongest in the region with $1.6 billion in assets,” advised Minister Hamilton. “There is no other Social Security institution in the region that can compare with the one that we have in St. Kitts and Nevis, and I want to applaud all those, over the many years from the first Board to today that have contributed to the strength and to the development of Social Security.”

He also thanked members of the staff who have worked hard to put the St. Christopher and Nevis Social Security Board in a position where it is stronger than the rest in the region.

“We are not taking it lightly because my first principle is thrift even when the going is good, because there are some days when it is going to get bad,” said Minister Hamilton in conclusion. “So I am asking, those who administer Social Security to recognise that and exercise thrift, and I am asking you in your homes to also exercise thrift.”