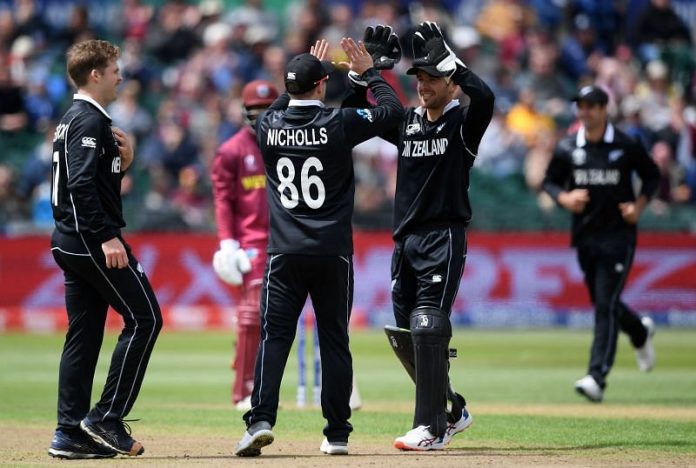 New Zealand, (ESPN) -Rain played an early spoiler in the third and final T20I between New Zealand and West Indies at Bay Oval. Only 2.2 overs were possible in a contest that promised much.

With Tim Southee joining the Test squad in Hamilton, Mitchell Santner became the eighth New Zealand captain in men’s T20Is. He won the toss and put the West Indies in under overcast conditions.

With Kyle Jamieson and Ross Taylor also having joined Southee on the trip to Hamilton, New Zealand brought back Hamish Bennett, and added all-rounder Daryll Mitchell and Scott Kuggeleijn to their XI. The toss seemed a perfect recipe for the hosts to put the West Indies’ top order under pressure with seam and pace.

Santner, though, opted to bowl the first over himself, perhaps with a mission to avoid later match-ups with the likes of Nicholas Pooran and Kieron Pollard, who had taken him for three successive sixes in Sunday’s game.

Two of Santner’s first three deliveries were fired down leg. Then, Brandon King stepped away and lofted him over the extra cover boundary, making the first over a productive one for the West Indies.

Lockie Ferguson, who picked six wickets in the first two matches, started with a wide slip in place and got King to edge as he sought to drive the first ball, but the ball flew past a diving Mitchell to the boundary. Ferguson then held the length back a touch but kept it fast and wide again, and King had a slash at it, only to hole out to Jimmy Neesham at third man.

Kyle Mayers, playing just his second match, walked in next, and nonchalantly whipped one bowled down the leg side past short fine leg to get off the mark in style. Ferguson had another shot at a wicket with a wicked in-dipper to Andre Fletcher, but the inside edge as the West Indies opener looked to defend, flew low to the left of Tim Seifert and through to fine leg for four.

At 25 for 1, West Indies had made their intentions of attacking clear, but the conditions were ripe for the New Zealand seamers to cash in on the overhead conditions. This was amply clear when Bennett got his first two balls to pitch and fizz off the surface, beating two attempts by Mayers to counterattack by swinging across the line.

That’s when the hitherto steady drizzle intensified and forced the players off the field. It would continue to alternate between a light drizzle and steadier rain through the rest of the evening, with the umpires eventually calling it off with about a half-hour to go before the threshold for a five-over game.

A brief, but very significant ceremony, was held at the NTV studios, on Thursday 21st January, 2021. On that day, the organization known as The...
Read more
Sports

(Reuters) - The Tampa Bay Buccaneers will have something going for them no other team has had in 54 previous Super Bowls, home field...
Read more
Sports

ATLANTA (AP) — His name is all over the baseball record book and, indeed, Hank Aaron could do it all. Sure, he’s remembered mostly for...
Read more

The lovely @vikreation.inspire joins your favs on Island Tea in the am. Tune in!

Settlement of Trade Dispute With SKN Hailed as a Major Victory for Belize Farmers | WINNFM 98.9

Settlement of Trade Dispute With SKN Hailed as a Major Victory for Belize Farmers - https://www.winnmediaskn.com/?p=8221

St. Kitts and Nevis has agreed to re-impose the 40

As social media continues to reveal pictures of sh

A brief, but very significant ceremony, was held a

The good folks at The St. Kitts and Nevis Customs

The Cable, a telecommunications company on St. Kit