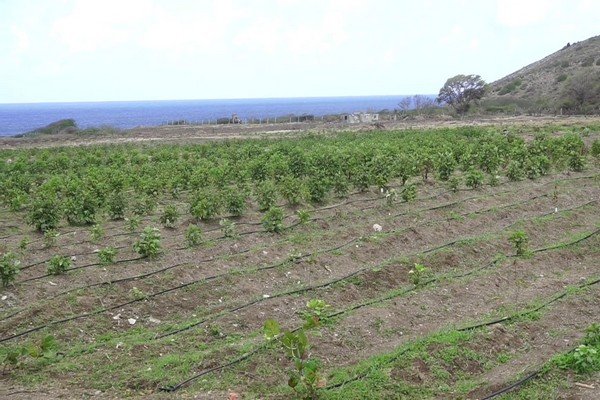 NIA CHARLESTOWN NEVIS – – The Department of Agriculture has invested more than $150,000 in the production of fruits on 35 acres of land at the Indian Castle Estate as part of the Nevis Island Administration’s (NIA) thrust toward food security and sustainability on the island.

That is according to Deputy Premier Hon. Alexis Jeffers, Minister of Agriculture in the NIA. He said some 3000 fruit trees have already been planted.

“We have planted 400 guava trees, 300 Sugar apple trees, 1310 coconut trees, we’ve also planted about 7.4 acres of passion fruit and dragon fruit trees, 135 gooseberry trees, 55 sea grape trees- that is to provide some buffer as well, 165 pomegranate trees, 1.75 acres of banana trees, 230 avocado trees, 190 soursop trees, half acre of sorrel, about one tenth of an acre of arrowroot, 60 Amory Polly mango trees on one acre of land, about 130 citrus trees of varied types, and about one acre of cassava,” he reported.

The Agriculture Minister was at the time addressing the July 13, 2021 sitting of the Nevis Island Assembly.

He informed that the project is a work in progress as additional trees will be planted. He further pointed out that this is the first time the Department has undertaken this level of production in one area. He said when fully planted, the project will be a showpiece that will continue to produce a variety of fruits.

“The types of crops that we have chosen here will be producing for years to come. As a matter of fact we started a project here at Cades Garden which we consider to be a leisure farm whereby locals and tourists can enter that particular compound and tour the area and pick fruits and eat… and we want to duplicate that at Indian Castle.”

Mr. Jeffers highlighted the fact that growing some of these fruits, for example coconuts, would reduce the amount of produce imported to the island. In one month alone, he said, about 5350 coconuts had been imported to Nevis from Guyana. Three varieties of coconuts- red, green and yellow, have been planted at India Castle.

On Friday, July 16, however Mr. Marvin Lewis, supervisor at the farm, reported that a number of their Weed Eaters had been stolen from the storage building. An appeal was made to the general public for information to locate the stolen equipment.