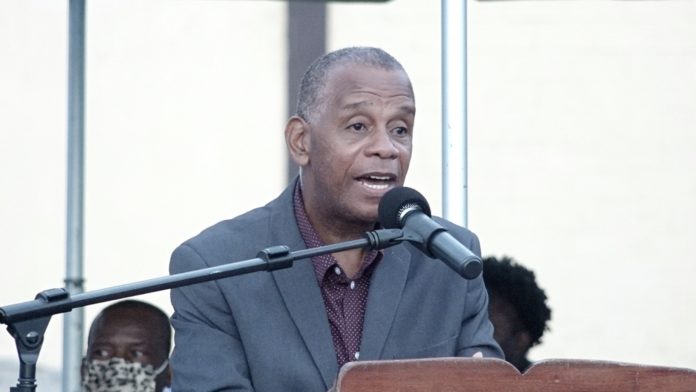 NIA CHARLESTOWN NEVIS (July 08, 2022) — Hon. Eric Evelyn, Minister of Sports, in the Nevis Island Administration (NIA) says the Ministry and Department of Sports stand ready to continue supporting the game of netball on the island.

The minister made the comment while delivering remarks at a recent celebration marking the opening of the refurbished Cicely Grell-Hull Dora Stevens Netball Complex in Charlestown. The event was held under the patronage of national netball legends Latasha Isles and Carol Liburd-Ward.

“It’s almost a brand-new facility. Courts have been resurfaced, remarked. We’ve done a lot of work on the pavilion, on the stands. Tonight, brand new lights will be switched on as well, and so I want to commend all who have been involved in this almost brand new facility for netball.

“We want to assure the netballers and all in the netball fraternity that your administration, this Department and Ministry of Sports will continue to support you in every possible way,” he said.

Mr. Jamir Claxton, Director of the Department of Sports, while chairing the ceremony, spoke of the reason for the extensive multi-million-dollar refurbishment work done on the facility.

“Netball, for a very long time, has been a very important sport to the people of Nevis over the years. We’ve seen some ups and downs but regardless of the situation there’s always been a motivation to play netball.

“Having said this, not only [does] netball require the administrators, the coaches, the players, officials but [it] also requires the requisite facilities to ensure that the sport thrives.

“The government of Nevis through its Department and Ministries of Sports and Communications and Works understands this responsibility, and thus we embarked on a mission to provide the necessary resources, to ensure that the facilities are available for sports to be played across the island, and that’s why we would have invested monies, millions, into the refurbishing of this particular facility,” he said.

Meantime, Hon. Spencer Brand, Minister of Communications and Works stated that the end result of the refurbishment project undertaken by the Public Works Department demonstrated its efficiency.

He used the opportunity to appeal to the public and those in the netball fraternity to take care for the facility.

“You would agree that the Nevis Island Administration would have expended significant resources here to reconstruct and to refurnish this facility.

Mr. Brand who is also the area representative for the St. Paul’s Parish commended the netball fraternity and those affiliated with the sport on Nevis.

“I want to take this opportunity to wish all the persons who have been associated with netball on the island of Nevis for the past 50 years heartiest congratulations. I want to say to you, that with this refurbished facility, we expect that netball in Nevis will continue to grow from strength to strength, and you can rest assured that you have a partner in the Nevis Island Administration with our support for netball.

“Congratulations. God bless and enjoy this facility for many, many years to come,” he said.