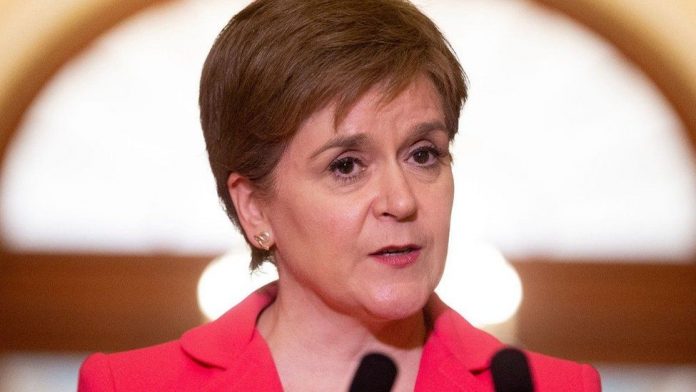 (The Guardian) Nicola Sturgeon has set herself on a collision course with Downing Street by asking the supreme court to rule on the legality of holding a new referendum on Scottish independence without Westminster’s permission.

In an attempt to force the issue, Scotland’s first minister said the lord advocate, Dorothy Bain QC, had written to the supreme court in London at her request, asking it to establish whether the Scottish government had the necessary legal powers to stage a consultative referendum on its own.

She told MSPs her government wanted to stage a second independence referendum on 19 October 2023, using the same question put to voters in 2014: “Should Scotland be an independent country?”

In a statement at Holyrood, Sturgeon said that if the court ruled that would not be a lawful use of her government’s resources or breached its constitutional powers, the Scottish National party (SNP) would make independence its only policy at the next UK general election.

She told MSPs that would make the election “a de facto referendum” in which the SNP would be empowered to open independence talks with the UK government if it won a majority of votes. In the 2015 general election, the SNP won 49.97% of the overall votes in Scotland but 45% in 2019.

She told reporters it would be “ridiculous” to describe that process as a unilateral declaration of independence, but said: “The point I’m making is that Scotland cannot and will not be in a position where its democracy is a prisoner of Westminster intransigence.

“People will have that opportunity to make their views known on independence and [we] will put that question at the heart of the election campaign.”

Many constitutional lawyers believe the court will rule that it would be unlawful for Holyrood and the Scottish government to stage a referendum of this sort without Westminster giving it the powers to do so under section 30 of the Scotland Act.

Sturgeon said she wanted to pre-empt inevitable legal battles with the opponents of independence and the UK government over this question, hence the request to the supreme court.

The lord advocate had meanwhile notified the UK government’s law officers of her request to the supreme court, the first minister added. The court confirmed it had received the request and would hear the case, and the court’s president, Lord Reed, will now decide how to proceed.

Sturgeon said her preferred date for staging the referendum was set out in a new referendum bill, also released on Tuesday. In her letter to Boris Johnson, she said she deeply regretted taking the step but that the prime minister had forced it on her by refusing to grant a section 30 order.

“[You] and I will never agree on the merits of independence for Scotland,” she said. “But I would expect any democrat to agree that it is unacceptable for the people of Scotland to be blocked from making that choice given the clear majority for a referendum in the Scottish parliament.”