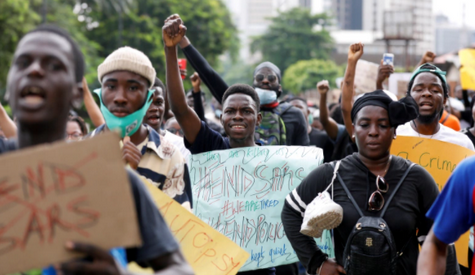 LAGOS (Reuters) – The head of Nigeria’s police dissolved its Special Anti-Robbery Squad with immediate effect on Sunday, a police statement said, prompted by days of protests across the country against alleged brutality by the controversial unit.

The protests broke out after a video circulated last week allegedly showing members of the unit – known as SARS – shooting dead a man in Delta state. It also prompted a globally-trending social media campaign to abolish the squad.

Demonstrators also alleged that police shot dead another man while marching in the southwestern city of Ogbomosho on Saturday. Police did not respond to requests for comment on the allegations.

“The dissolution of SARS is in response to the yearnings of the Nigerian people,” the police statement said.