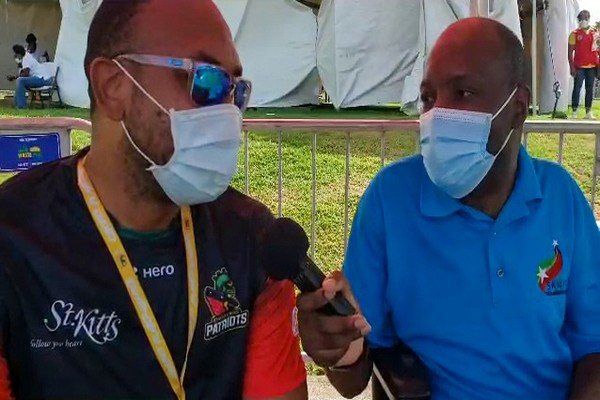 Basseterre, St. Kitts, September 16, 2021 (SKNIS): The economic contribution of the Caribbean Premier League Twenty20 (CPLT20) to St. Kitts and Nevis will be calculated and released in the coming weeks. However, Minister of Sports, the Honourable Jonel Powell, said that successfully hosting a major international sporting event during a pandemic has been extremely valuable.

In an interview at Warner Park after the final match of the tournament won by St. Kitts and Nevis Patriots, Minister Powell noted that the country has set international precedence and the returns have exceeded the investment.

“It enhances a lot of the relationships we have had already,” he said, noting the many local, regional, and international elements that come into play for such an event. “Part of the arrangement involves the donation of a lot of gears.”

Having 33 matches in 16 days at the same venue also provided many opportunities for locals to learn from experts the world over. The ground staff at Warner Park were key beneficiaries.

“CPL would have had one of the top groundsmen in the world who would have been here for something like three months working with our guys, transferring knowledge, teaching them a bit more than they might have known before and I think all of this adds to the total development of sports here in St. Kitts and Nevis,” Honourable Powell stated.

Chief Executive Officer of CPL, Pete Russell, was also very complimentary of the ground staff, giving them praise for the high-quality tournament this year.

Additionally, a number of local professionals were contracted to provide services in an array of areas, including marketing, photography, and entertainment. The hosting of the tournament also coincided with the establishment of the Len Harris Cricket Academy. Further, promotional images of the Federation were beamed around the world during the tournament, inviting persons to visit.

“I am satisfied that the people of St. Kitts and Nevis have gotten a significant return on the investment,” Minister Powell said.

He expressed pride that St. Kitts and Nevis continues to punch above its weight internationally, noting that this is a testament to the spirit, dedication, and resilience of the population.