No bail for Trinis charged in Grenada bank robbery 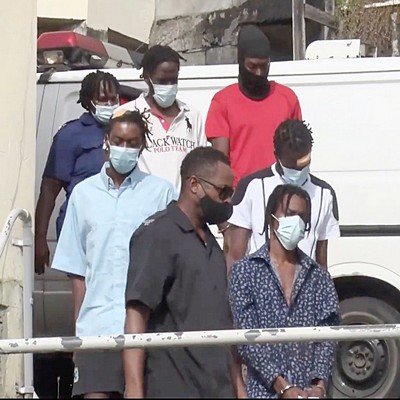 (Trinidad Guardian) ST GEORGE’S—Five Trinidad and Tobago nationals who attempted to rob a branch of the Grenada Cooperative Bank (GCB) on the island of Carriacou on Monday, have been remanded into custody after making a court appearance here yesterday.

The men—Jabari Roach, a 25-year-old air conditioning technician; Allan Melville a 28-year-old vendor; Akeem John a 32-year-old painter; Nashawn Scotland a 29-year-old mechanic and 36-year-old fisherman Keon Dick, did not have legal counsel when they appeared in the St George’s Number two Magistrate’s Court. They will return to court on November 3.

Each of the accused has been charged with three counts of robbery with violence; entering the state without the consent of an immigration officer and failing to present themselves to a government-approved quarantine facility.

Head of the Community Relations Department of the Royal Grenada Police Force, Inspector Trevor Rodney, said the investigations into the robbery are ongoing and other charges are imminent.