No Goals Yet in Super Six 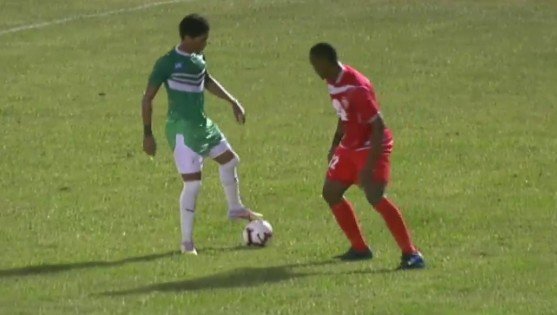 (SKNFA) In an unprecedented fashion, the third consecutive Super Six Playoff match ended in a 0-0 draw at the Warner Park on Wednesday when regular-season league winners Rams Village Superstars and Hobson Enterprises Garden Hotspurs failed to deliver a single goal despite several chances.

Hasani Flemming of Spurs cleared off the goal line what was the closest to a goal. Village striker Tiran Hanley got the ball past the Spurs goalkeeper only to see his creeping shot cleared off the line by Flemming. Spurs also had some chances but went begging and were little threat to the Village goalkeeper.

“We didn’t give up any goal. That was a plus. We created numerous chances, which is also a plus…I am very disappointed. We had too many chances. We had like ten chances in the first half; come back second half and had eight, nine chances…we create a lots of chances but we didn’t score goals and capitalize on the chances created,” he lamented.

Coach Austin Dico Huggins was pleased with his team’s performance, but said they will have to work on their finishing in order to improve. “We came to get three points so we got to go back and work on our finishing,” Huggins said.