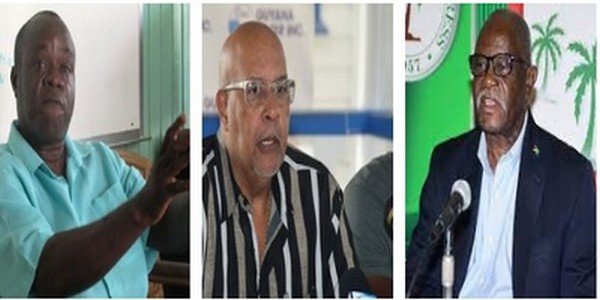 (Demerara Waves) Three executive members of the People’s National Congress Reform (PNCR) have blistered their party leader, David Granger, after he asked that they and others be blocked from managing the upcoming elections for leader because they had allegedly pushed for no-confidence motions against him.

Leader aspirants Aubrey Norton and Dr Richard Vanwest Charles as well as Winston Felix have all denied fueling the no-confidence motions against Mr. Granger, but they blamed him squarely for the lack of confidence that members have in him.

Already, top party officials are questioning on what basis the PNCR Leader could be concerned about bias when the party’s General Secretary Amna Ally as well Vice Chairman Annette Ferguson who are members of the Congress Committee were present at Joseph Harmon’s campaign launch. Ms. Ally was not among those who had spoken at that event, but Ms. Ferguson said she was backing Mr. Harmon because he is a “hardworking, dedicated committed” person who has given “selflessly to this great party.”

According to a letter dated October 19, 2021, Dr. Vanwest Charles stopped short of telling the PNCR Leader that Ms. Ally should not be part of the electoral process. “I hereby advise you, in the interest of transparency, credibility, impartiality and membership confidence, that your General Secretary desist from any electoral practice inimical to the culture of democracy within the PNCR. Such is within the best interest of all parties involved,” said Dr. Vanwest Charles, the son-in-law of late PNC Founder-Leader Forbes Burnham.