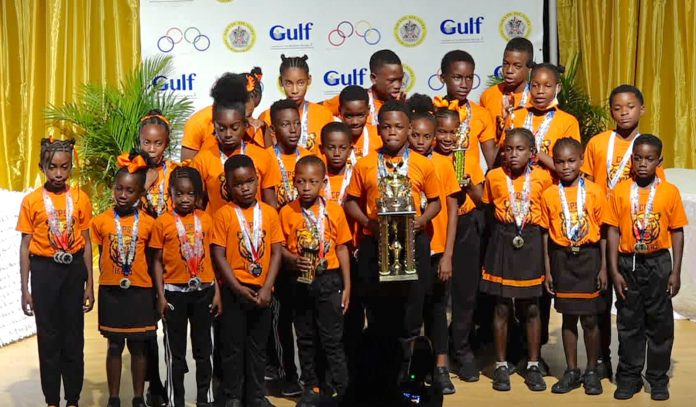 St Kitts and Nevis (WINN): Two weeks after the 2022 hosting of the Nevis Inter-primary School Track and Field Championship, “Mini Olympics”, the official scores have been released.  The scores were declared by Director, Mr. Garfield Virgo, during a Medal Distribution Ceremony on Wednesday, May 11 2022.

Following the meet affectionately known as the “Mini Olympics” controversy related to the final scores arose immediately after, sparking a vigorous review process. Virgo in his presentation explained the details of the review process.

“The meeting was called on April 29, two days after the meet (Mini Olympics). It was called with the coaches and reps of each of the Primary Schools. All schools were represented at the meeting and on that day, starting at approximately 2:00 pm that afternoon, we did a review of all the events.”

Virgo added, “The results were projected on a screen and the photo finish images for each race was also projected on that screen. Each team member or rep had an opportunity to look at the results and compare what they saw to what the results were. So, we went through all 54 events, just like that. While we were doing that, we also asked the coaches to take a tally; so they were keeping track of all the events and the scores as well.”

Permanent Secretary in the Ministry of Education, Mr. Kevin Barrett said it is important to have a review process of the sport when that is required. He highlighted that the event must be one of transparency.

In addition to the announcement of the results, the long awaited Medal Distribution was held. The medals were distributed by the Junior Minister of Education- the Hon Troy Liburd, Principal Education Officer- Ms Zhanela Claxton and Director at the Department of Sports, Mr. Jamir Claxton.