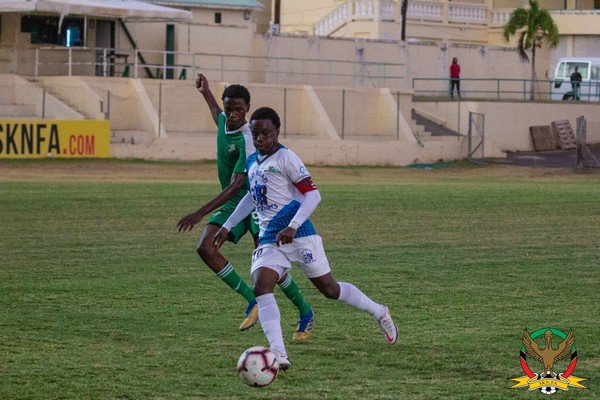 With some high profile matches in this past weekend’s SKNFA premier league ending in draws, three teams enjoyed victories. Two of those teams won on Friday night when MFCR United Old Road Jets defeated Hotsprings Bath United 2-0 and S.L. Horsfords St. Paul’s United dismissed Flow 4G Cayon Rockets 3-0. Tiquanny Williams scored both goals for Old Road, who are now back to winning ways after a suffering a losing streak and a draw in their last few matches. Williams scored in the 85th and 90th minute. It was a credit to Bath who held their opponents scoreless for 85 minutes, had it not been for two blunders that cost them the match.

All the SKNFA Premier League matches were streamed live on the SKNFA Facebook page. In the post-match analysis Loshaun Dixon and Esington Watts spoke about Old Road returning to winning ways and Bath United playing good football despite the loss. “It’s a heartbreaking moment for the Nevisian team,” Watts said. “They held out for 85 minutes and just some blunders and a goal scorer like Tiquanny Williams with great finishing instinct was able to capitalize on the mistakes,” he added.

In Friday night’s second match, defending champions S.L. Horsfords St. Paul’s United proved why they are favorites to repeat this season after they dispatched title contenders Flow 4G Cayon Rockets. This is the second time in a week that St. Paul’s defeated the team that was ranked second in the table, after defeating Spurs that was ranked second last week. Jovaughn Leader got the goalscoring off in the 38th minute followed by Vinceroy Nelson 10 minutes later with a stunning free kick yards out. Nelson, a former Cayon player celebrated his goal in front the Cayon bench as if to send a message to his old side. Anthony Caines, who came off the bench in the dying moments of the game scored in the 5th minute of stoppage time.

For St. Paul’s, their manager Derionne Edmeade said Cayon bossed them around in the first half and they had to make changes in the second half, despite leading 1-0. “We went into the second half and make the adjustments. We realized that we had to match Cayon’s energy based on how they were playing in the first half, he said. “We really had to look at what they were really doing and figure out what we were not doing properly and after making the adjustments I think we came out second half with St. Paul’s playing St. Paul’s football,” he explained.