One Injured in Overturned Vehicular Accident; No other Injuries Reported

St. Kitts and Nevis (WINN) – Videos and images were making the rounds on social media showing the aftermath of a vehicular accident along the main island road between the Ross School of Nursing and the Seaview Garden Hotel Project.

The SUV collided with the guard rail and turned over in a ditch on the seaside of the island main road based on the video footage.

The Police confirmed that one person was involved in the accident and was taken to the Joseph N France General Hospital after communicating that they were feeling pain in the shoulder.

Based on what the authorities know so far, the driver involved in the accident was travelling to Basseterre from the West and trying to overtake two vehicles in front when the vehicle directly in front made to overtake as well which caused the driver behind to swerve in avoiding a collision, lost control, collided with the guard rail and turned over. 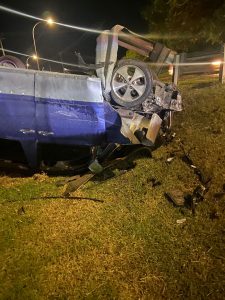 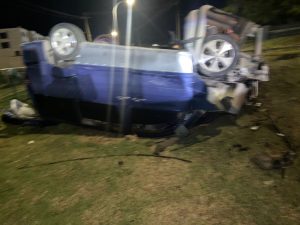 After arriving on the scene, authorities called Fire and Rescue to extract the driver using the Jaws of Life from the vehicle.

WINN will provide an update as more information becomes available.