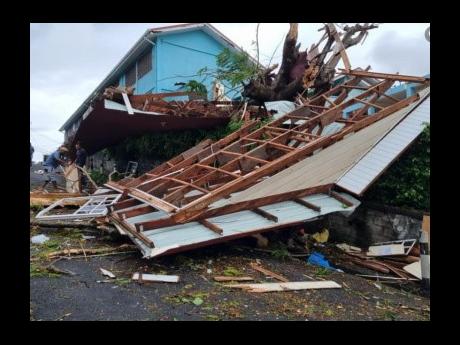 “The damage assessment has commenced and we are moving swiftly to repair the damages and bring relief to the residents,” he said, adding that the National Emergency Management Organisation (NEMO) had given the “all clear” for people to come out of their homes.

“My condolences goes out to the family of the gentleman who lost his life in Fond St Jacques. You are in my thoughts and prayers,” Chastanet said, noting that among the buildings damaged is the Bocage Secondary School.

“Thanking God that the majority of persons are safe. We will build back stronger,” he said, adding that the public utilities company had started to reconnect water and electricity to homes and buildings across the island.

He said he would be meeting with his Cabinet later on Saturday and other stakeholders ‘to get an assessment of the damage that was caused by the storm and to get things repaired as quickly as possible.

“We have been advised that there is another storm brewing, we still cannot confirm whether it will come to St Lucia but we must prepare ourselves for that eventuality and we are moving very quickly to get the country clean.”

The Miami-based National Hurricane Centre (NHC) in its bulletin on Saturday, said that Hurricane Elsa was nearing the coast of Hispaniola and that conditions are expected to deteriorate later this morning.

“The centre of Hurricane Elsa was located near latitude 16.2 North, longitude 69.0 West. Elsa is moving very quickly towards the west-northwest near 31 miles per hour (mph),” it said, adding that a decrease in forward speed is expected later Saturday and Sunday, followed by a turn toward the northwest Sunday night or Monday.

“On the forecast track, Elsa will move near the southern coast of Hispaniola later today and tonight, and move near Jamaica and portions of eastern Cuba on Sunday. By Monday, Elsa is expected to move across central and western Cuba and head toward the Florida Straits,” the NHC said.

It said the maximum sustained winds have decreased to near 75 mph with higher gusts. “Little change in strength is expected today, but slow weakening is forecast on Sunday and Monday when Elsa is expected to be near or over Cuba. “