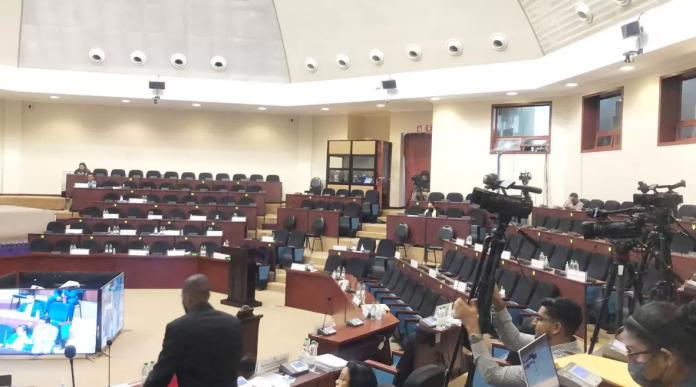 GEORGETOWN, Guyana, CMC – Opposition legislators on Monday walked out of the National Assembly after the Speaker, Manzoor Nadir shot down an attempt by Opposition Leader, Aubrey Norton, to seek parliamentary approval for a motion allowing for constitutional and legal amendments to ensure a clean voters list.

“For a matter to qualify under this particular item, the issue of definite, urgent public importance are necessary and it’s an issue that also that’s upcoming and I consider this motion at this time not of the urgency that requires this debate so I would be unable to allow the motion to proceed further than this,” Nadir said.

Following the ruling, the opposition members of the coalition, A Partnership for National Unity+ Alliance For Change (APNU+AFC) walked out of the building not staying for the debate on several pieces of legislation including the one that establishes the Constitutional Reform Commission.

Norton in his motion had referred to the recommendations by several observer missions that steps be taken to cleanse the voters list.

He said that while Guyana has an estimated population of 750,000, the voters list contains 682,000 names and United States Homeland Security statistics show that more than 54,000 persons have migrated to the US over the past five years.

“That suggest that it cannot be a credible list,” Norton said, adding “it should be obvious to most that the list has to be cleaned”.

There have been repeated calls for this clean voters’ list ahead of next year’s Local Government Elections and Monday’s move was the latest by the APNU+AFC to force the government into giving into demands for the voters list to be cleansed of the names of dead persons and migrants.

In the absence of the opposition, Attorney General and Minister of Legal Affairs, Anil Nandlall SC moved the second reading of the Constitutional Reform Commission Bill 2022 indicating that constitutional reform is a fundamental process for an evolving society that requires widespread participation from the country’s political leadership and the general citizenry.

He told legislators that constitutional reform has been a “platform promise” of all political parties that contested the 2020 Regional and General elections.

“As I speak, I am speaking to empty benches on the other side,” Nandlall said, noting that this is particularly worrying given that constitutional reform efforts require the support of two-thirds of the National Assembly or in some cases, a referendum.

To get the required two-thirds majority, Opposition Parliamentarians must give their support since the government has only a one-seat majority. Nandlall said that people must demand that their representatives fully participate in this process.

“We cannot travel the other half without the other half. I hope that the empty benches to which I am speaking is not a forbearing of what is to come in relation to this process,” the Attorney General said, adding that the Bill enjoys parliamentary consensus since it was agreed to by the nine members of the Parliamentary Standing Committee for Constitutional Reform that includes four opposition legislators.

Norton later defended the decision to stage the walk out saying the government had refused debate on the voters list motion, high cost of living, increasing poverty, alleged corruption by Vice President Bharrat Jagdeo and several other motions.

“The PPP (People’s Progressive Party) continues to make the National Assembly an institution that does not serve the people of Guyana,” Norton said, adding “the government is not democratic and they have no interest in or commitment to parliamentary democracy.”