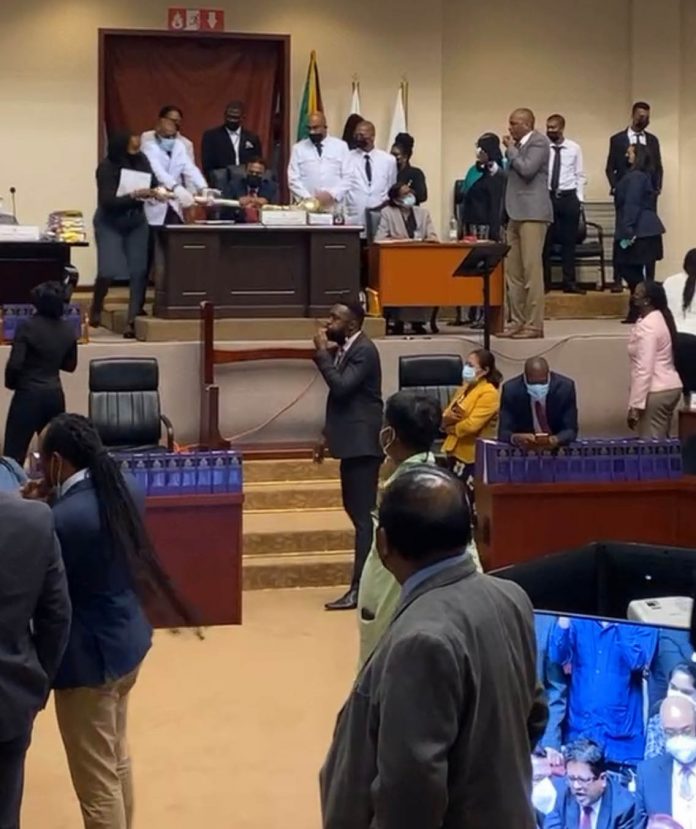 (Demerara Waves) The House Speaker’s mace was grabbed and taken away from the Chamber by a number of opposition A Partnership for National Unity+Alliance For Change (APNU+AFC) parliamentarians, in an effort to thwart parliamentary debate on the controversial Natural Resource Fund legislation.

Recordings show that the Sergeant-at-Arms and a number of parliamentarians wrestling for possession of the mace.

While the Parliament’s Standing Orders do not say that the mace must be present for laws to be passed, they say that Guyana’s Parliament should rely on the usage and practice of the British House of Commons as far as they may be applicable.

The coalition also contended that the Natural Resource Fund law was not properly passed because several of the government parliamentarians were standing rather than sitting at the time of the vote. “The Standing Orders state that a Member of the Assembly must be in his or her seat to vote in the National Assembly. Most of the Government MPs were out of their seats, especially the Prime Minister who was on his feet waving. It is therefore clear that there was no legal vote,” APNU+AFC added.

The Standing Orders on the Parliament’s website appear to be silent on the need for parliamentarians to be seated before a vote is taken.

The coalition said the passage of the Bill was “null and void”, the 2019 Act was not repealed and remains in f0rce. ”
“What is alarming, is that the Speaker who should know better was complicit in this gross violation of the Standing Orders, Principles and Conventions associated with the good conduct of Parliamentary affairs,” the coalition added.

Minister of Parliamentary Affairs and Governance, Gail Teixeira dismissed the claims by the coalition, saying that, “This is utter nonsense. There was a mace at time. l called that the question be put and the MPs returned to their seats and voted when called on by Speaker to vote yes,” she told Demerara Waves Online News.

House Speaker Manzoor Nadir, in wrapping up Wednesday’s sitting, did not hint at any action he might take against those who carted off the mace. He said persons gained access to the control booth and disconnected the microphones, Internet feed, disrupted the communication devices that he had on his desk.

The APNU+AFC made no mention of the taking away of the Speaker’s Mace by a number of its parliamentarians. While a Parliament Office staff was seen lying on the ground with the mace, a woman was heard accusing him of being a “house negro.”

During Wednesday’s sitting, the Speaker rose on his feet, named several parliamentarians and asked that they leave the Assembly but they refused. They were on Opposition Chief Whip, Christopher Jones, Sherrod Duncan,
Tabitha Sarabo-Halley, Ronald Cox, Ganesh Mahipaul and Annette Ferguson.

During the last Parliament, then President David Granger had described the then opposition People’s Progressive Party parliamentarians as “vulgarians” when they had chanted him down and held placards as he had addressing a sitting of Parliament.

Prior to that then Opposition Leader Cheddi Jagan had been banned from speaking in the National Assembly by then Speaker Sase Narine unless he had apologised for tossing down books and dislodging the mace. Dr Jagan had refused but had gone on to win the 1992 elections and had addressed Parliament as President.