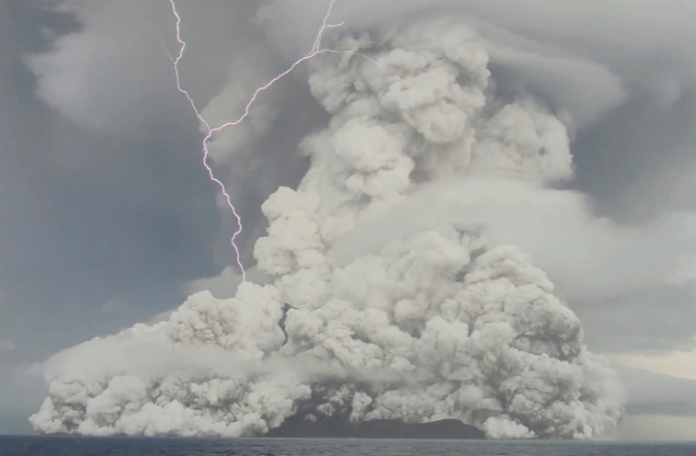 (Al Jazeera) Overseas Tongans are waiting anxiously for news of loved ones after a powerful volcanic eruption and tsunami severed communications with the kingdom in the southwestern Pacific Ocean.

Concerns among the 85,000-strong Tongan community in New Zealand were heightened on Monday by news it could be two weeks before communications are restored following the eruption of Hunga Tonga–Hunga Haʻapai on Saturday.

Besides leaving people in the dark about the fate of their loved ones, the lack of internet threatens Tongans reliant on money transfers from relatives overseas.

“I think the worst part is the blackout and the fact that we know nothing,” said Filipo Motulalo, a New Zealand-based journalist with Pacific Media Network. “There is no communication,” he added.

“Our home is among those close to the area that was flooded already so we don’t know how much damage there is.”

Shairana Ali, chief executive officer at Save the Children Fiji, told Al Jazeera from the Fijian capital of Suva that the situation in Tonga was “quite dire”.

“There is an immediate need for food and water because there is severe ash fall and as a result of that water sources have been contaminated in most of the islands that have been affected,” she said.

“We are concerned about air quality as well. And our concern is for children who would obviously have had mental trauma because of this once-in-a-lifetime event.”

New Zealand Prime Minister Jacinda Ardern said officials had made satellite contact with the country’s high commission in Tonga’s capital, Nuku’alofa, after the eruption which triggered a tsunami that swept Pacific coastlines from Japan to the United States and was heard as far away as Alaska and Finland.

New Zealand was informed that there had been no reports of death or injury in the capital, but there was “significant” damage in some areas.

“We’re hopeful everyone is alright. We accept there is a problem with the internet but we hope for the best,” he told the AFP news agency.

Fakana’ana’a-ki-Fualu, who is arranging for containers of relief supplies to be sent to Tonga, said a cable fault preventing internet access was a serious issue for families reliant on funds sent by the Tongan community in New Zealand.

“That will be a problem and we will have to look at alternatives,” the community secretary said, adding that he expected the Tongan government, with support from New Zealand and Australia, “will be able to do something to help out”.

Air New Zealand, meanwhile, has postponed a repatriation flight to Tonga because of the volcanic ash clouds from the eruption.

The flight had been scheduled to leave Auckland on Thursday.

“We pray God will help our country at this sad moment. We hope everybody is safe,” Maikeli Atiola, secretary of the Wesleyan Church of Tonga in Auckland, told Radio New Zealand.