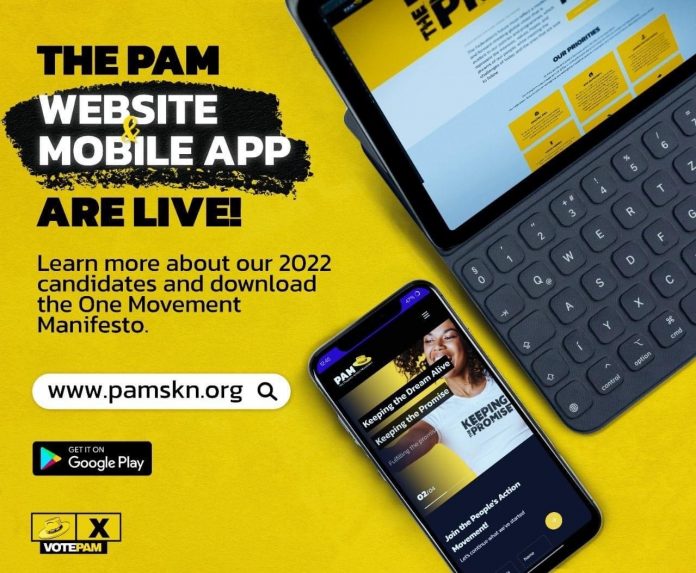 In the Manifesto, 11 pillars were laid out as the PAM’s core priorities: Creating Jobs, War On Poverty, Caring For People, National Youth Agenda, Boosting Tourism, Enhancing Food Security, and more.

The party in the Manifesto pledged to launch an incubation and acceleration program called the $100 Million-Dollar Dream Fund, designed to power Entrepreneurship and Small Business Development by injecting seed money into approved business ideas of up to EC $200,000.

The party also pledged to create 5,000 New Jobs under their “Jobs Now” program over the next five years; introduce the Housing Revolution that will see the development of 3,000 housing solutions, distributed fairly across both islands in the next five years and eight other pledges in their first 100 days if elected.

PAM Candidate for No 1, Natasha Grey-Brookes, highlighted that there were ten days left until the General Elections in the Federation and that PAM and CCM’s manifesto represent the hopes and dreams of the people of the Federation.

“Ten more days from liberation day. We are at the doorstep of history, and we only have you, the people, to thank. You have stayed the course with us. You have rallied on the corners, on the verandas, in the yard spaces and in the communities; together, we stand, and we share the hopes and dreams of this great nation. PAM and CCM documented your needs, your desires and your ideas, and now we present them to you in our wonderful manifesto.”

Grey-Brookes had a successful nomination earlier in the day and was supported by some party stalwarts, including Sir Kennedy Simmonds, former Prime Minister and Dame Constance Mitchum, the first female parliamentarian in St. Kitts and Nevis. 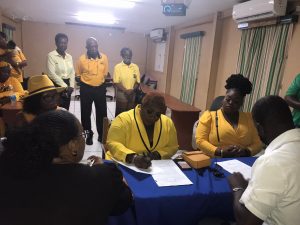 “Unemployment is a burning issue in East Basseterre and throughout the country. A number of persons have been unemployed as a result of the COVID situation; however, I think we need to at least sit-down and assess the age ranges in terms of these persons who are unemployed, look at whether they have some skills or talents that we can harness into a business and see how best we can get them in the Jobs Now Program.”

During her introduction of PAM Candidate for Constituency No 4 at the manifesto launch, Dame Mitchum had a message for the young people.

“I just want to say a few words to all these young people that I am seeing around here; make sure nobody [fools] you about your party. They have a lot of talking heads going around on the radio “ra ra ra ra” telling you “oh, your party is no good blah blah blah”. But I know, the day after election, a lot of them are going to get a dose of hush.”

CCM leader and Premier of Nevis, Mark Brantley, was in attendance at the manifesto launch in Old Road following his successful nomination in Nevis. The Premier also advised the PAM/CCM supporters to ignore what is being said about the viability of the parties in the upcoming election.

In brief words before introducing PAM leader Shawn Richards, Sir Kennedy Simmonds said he was encouraged by the presence of young people at the launch.

“I can already feel like that victory coming on Friday, August 5, Liberation Day. And when I look at you tonight, I am so encouraged, and it is not just because of the crowd; it’s the young people. PAM is in hands.”

Richards, the leader of PAM, emphasised that the people heavily influenced the manifesto’s contents.

As the General Elections draw near, the people of the Federation await the release of manifestos from the other political parties in the Federation.